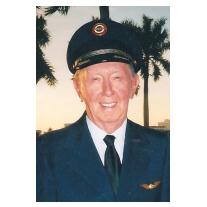 Eugene Schmidt Naples, FL
Eugene Schmidt passed away June 27, 2012.
He was born on October 17, 1928 in Minneapolis, MN. As a young boy he would ride his bicycle to the Minneapolis Airport to watch airplanes - his passion. He was hired by Northwest Airlines in an apprentice mechanics position. He received the FAA approved aircraft and engine licenses. When he had an extra dollar, he would buy a flying lesson. In 1951 he relocated to Tokyo, Japan to work on the Korean Airlift for which Northwest Airlines had a contract. A deferment from his draft board had issued him this duty, which concluded in 1953. He was then drafted into the US Army, stationed in Honolulu, Hawaii. In August of 1954, he was married to Jane Bishop, a radio operator for Northwest Airlines whom he had met at LaGuardia Airport. After his two year military commitment they returned to NY where he studied and received his Flight Engineer Certificates. In 1957 they relocated to Minneapolis. He went on to get his pilot's license and flew as a Captain on the Electra, Boeing 707, 727, & 747 internationally. In 1970 he trained and flew with Canadian pilots on the Electra to the oil drilling rigs in the Arctic.
After retiring, Gene became active at the Naples Airport. He was on the Airport Authority from 1990 to 1994. His one goal was to build a new control tower, which was done. In 1998 he served on the Board of the Collier County Airports and was interim Executive Director for two years. He served on the Orleans Condo Board for 25 years, was President/Chairman of Presidents Council; President of Harbour Drive; Gulf Shore Boulevard Association; FAA Aviation Safety Councilor; Naples Airport Noise Compatibility Committee; member of Quiet Birdmen; and President of Naples Flying Club.
He is survived by his wife of 57 years, Jane Schmidt; son, Brad Schmidt and daughter in law Kathy; as well as granddaughter, Brecklyn; his sister, Cathleen Buechele and her husband, Kenneth; sister, Mary Schmidt; and sister, Margaret DeMarco and her husband, John.
He was preceded in death by his mother, Mary Schmidt; and father, Michael Schmidt.
In lieu of flowers, donations may be sent to Moorings Presbyterian Church 791 Harbour Drive Naples, FL 34103.
A memorial service will be held at a later date. Please visit www.fullerfuneralhome.com for online condolences.
Published in Naples Daily News on June 30, 2012
Posted by Unknown at 4:05 AM