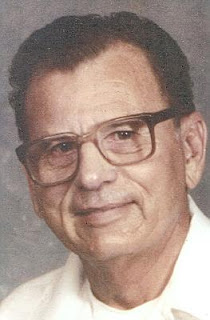 Obituary
Robert John Murphy 92, died of a cerebral hemorrhage on Saturday, Feb 18, 2012 at Northside Hospital. Bob was born April 20, 1920 in East St. Louis, Illinois, the son of John W. and Adeline V. (White) Murphy. The family moved to Indianapolis, where he grew up. When he was seven, his parents took him to the local airfield to see Charles Lindbergh, who was touring the nation with the Spirit of St. Louis. It was love at first sight. Bob decided right then he wanted to fly. His first plane ride was in a World War 1 ”Jenny” in 1929.  After graduating from Arsenal Technical High School in 1938, Bob worked for Allison Engines as a machinist. Every dollar went for flying lessons. He soloed in 1940 , and in 1941-42, earned his private license and his Flight Instructor and Commercial Pilot licenses. From 1942 to 1944, he was a flight instructor for the U.S. Navy’s V-5 program in Muncie, In. and Detroit. In 1944, he enlisted in the U.S. Army Air Corps as an aviation cadet. He already had over 2000 hours of flying time. After the war, he obtained his Airline Transport Rating and Instrument rating and returned to Indianapolis. He was hired as a flight instructor by Roscoe Turner, the famed racing pilot of the 1930s. Col. Turner was then operating “Roscoe Turner Aero Corporation” Col. Turner was also the corporate pilot for the National American Legion, flying their officials all over the country in a Lockheed Lodester. For the next two years, Bob was Col. Turner’s co-pilot. He often said that if you could survive flying with Roscoe, you could survive anything. He was hired as a co-pilot by Wisconsin Central Airlines in March, 19499. As the airline grew , it changed its name to North Central, then Republic, which was bought by Northwest Airlines (now merged with Delta). Bob checked out as Captain in April 1952, and was based in Minneapolis, MN. In addition to his regular line pilot duties, he was a designated FAA Check Pilot for his airline for over 25 years. During his 32 year career, he accumulated 31,735 flying hours, flying the Lockheed 10-A, DC-3, Convair 340/440, and lastly, the DC-9-50. He retired from Republic on April 28, 1980, on reaching the then-mandatory age of 60. He immediately bought a motor home saying he “wanted to see what the country looked like from a lower altitude”. He and his wife spent the next 10 years touring all 50 states. They made their home in Estes Park, Co. and divided their winters between Florida and Arizona. He was a member of the Quiet Birdmen, Minneapolis Hanger, and the Airline Pilots Association. Besides traveling, he enjoyed building RC model airplanes and woodworking. Surviving is his wife of 59 years, Lou Arden (Andrews) Murphy, and his daughter, Melanie Ann Murphy of California. A son, Robert Arden Murphy, preceded his father in death. He is also survived by his lifelong airline friends, who were his “ second family”. A memorial service will be held at a later date. Private interment will be at Bay Pines VA Cemetery.
--------------------
MURPHY, Robert J.: Newspaper Obituary and Death Notice
Tampa Bay Times (FL) - Monday, February 20, 2012
MURPHY, Robert J., died Feb. 18, 2012. He is survived by his wife Lou, and daughter Melanie Murphy. See full obit at www.rlwilliams.com  Williams & Son 49th St. N.
Posted by Unknown at 10:15 PM