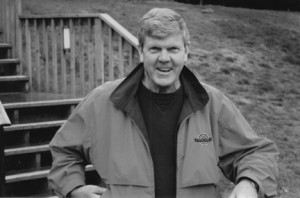 http://www.legacy.com/obituaries/toledoblade/obituary.aspx?n=Michael-Harron&pid=160274863#fbLoggedOut
Michael O. Harron (1940-2012)
(News article) A sports standout at St. Francis de Sales High School, a decorated Navy pilot in the Vietnam War, and a retired Northwest Airlines 747 captain, Michael O. Harron has died in Grady Memorial Hospital, Atlanta. He was 72.
Mr. Harron, a longtime resident of Dunwoody, Ga., an Atlanta suburb, fell Sept. 20 while at a grandson's football game. He did not regain consciousness and died the next day, his wife, Theresa, said.
He was born April 12, 1940, in Toledo to Roberta and John F. Harron, who became manager of Sun Oil's Toledo refinery. He attended Central Catholic High School as a freshman and the next year entered the then-new St. Francis de Sales High School.
"He was my best friend in high school," said Francis X. Gorman, a retired judge of Toledo Municipal Court. "He set the standard for everybody who came after him at St. Francis. He was my hero."
Mr. Harron played on the St. Francis basketball team for three years and was co-captain of the basketball and football teams his junior and senior years. He also was captain as a junior and senior of the golf team, which won the northwest Ohio regional tournament and finished 10th in the state championship. He had varsity letters in the three sports his junior and senior years.
On top of that, he was the president of his junior and senior classes. And he was salutatorian of his graduating class - the school's first - in 1958.
"He was a very good athlete," said his brother, John G. Harron, also a former manager of the Sun Oil Toledo refinery. "He did very well academically as well as athletically."
Mr. Harron returned to Toledo for the 50-year reunion of his St. Francis class, his brother said.
He learned before his death that he was to be inducted into the St. Francis hall of fame. His sons Michael and Brian will attend the ceremony Oct. 18 at the school, as he would have wanted, his wife said.
He went to the University of Notre Dame and in a five-year program received degrees in English and aeronautical engineering. Afterward, he joined the Navy.
"He was very patriotic. He wanted to fly jets," his wife said. He was assigned to the USS Coral Sea, an aircraft carrier, and in the Vietnam War flew an A-4 Skyhawk on 99 combat missions. He wrote to his wife every day.
"It was just a very life-changing experience for him, to be always worrying about whether you'd get back to the ship," she said.
"We were so young when we got married. When he came home, it reinforced what was most important to him, which was his family."
He was awarded two Distinguished Flying Crosses, 10 Air Medals, and five Navy Commendation Medals, his family reported, yet he rarely spoke of them.
"He just wasn't that kind of guy," his wife said.
Judge Gorman learned of the honors when reading his obituary.
"I was blown away. He was one of the nation's heroes," Judge Gorman said.
Mr. Harron was a pilot for Northwest Airlines for 32 years, retiring in 2000 as a captain of 747s. His assignments sent him around the world and away from home for several days at a time, but he was off duty for several days at a time as well. As his seniority increased, he could schedule his work around his sons' activities.
"He loved flying," his wife said. "It was a wonderful life, and when he was home, he was home."
Surviving are his wife, Theresa, whom he married Aug. 14, 1965; sons, Sean, Michael, and Brian; brother, John G. Harron; sisters, Sheila Harron and Bridget Harron, and eight grandchildren.
Services were last week in Dunwoody, Ga. Arrangements were by Fischer Funeral Care, Atlanta.
The family suggests tributes to the St.. Vincent DePaul Society of All Saints Church, Dunwoody,
Contact Blade staff writer Mark Zaborney at: mzaborney@theblade.com  or 419-724-6182.
.Published in Toledo Blade on October 5, 2012


~ IN MEMORY ~
NWA Capt. Michael O’Donnell Harron
U. S. Navy and decorated Viet Nam veteran
April 12, 1940 ~ September 21, 2012
Notification of the passing of retired NWA pilot and RNPA member Captain Michael Harron, age 72.  Captain Harron’s unexpected death was due to injuries that were suffered in a fall.  Captain Harron hired on with Northwest 12-02-1968.   Funeral services for Captain Harron will be conducted Thursday, September 27th at All Saints Catholic Church in  Dunwoody GA.
To view/sign the online guestbook please visit the funeral home website at  http://www.fischerfuneralcare.com/
Survived by his wife Theresa personal condolences may be sent to
5544 Bunky Way , Atlanta  GA 30338-3304    .... (770) 393-4503
http://www.legacy.com/obituaries/atlanta/obituary.aspx?n=Michael-HARRON&pid=160099920#fbLoggedOut
Michael O'Donnell Harron, 72, of Dunwoody passed away unexpectedly from injuries sustained in a fall on September 21, 2012. Michael was born on April 12, 1940, in Toledo , Ohio . He was preceded in death by his parents, John Francis Harron and Roberta Cusick Harron. Michael graduated from The University of Notre Dame in 1963 with degrees in English and Aeronautical Engineering. He joined the Navy in 1963 and after receiving his wings was assigned to the USS Coral Sea. He flew ninety-nine combat missions in Viet Nam and was awarded two Distinguished Flying Crosses, ten Air Medals and five Navy Commendation Medals. He joined Northwest Airlines in 1968 and retired after thirty-eight years as a 747 Captain. His faith and family were most important to him. He will be remembered for his love and devotion to his wife, Theresa, and his pride and joy in his three sons. Michael is survived by his wife of forty-seven years, Theresa, their three sons, Sean and wife, Andrea, Michael and wife, Jessica, Brian and wife, Colleen, grandchildren Lauren, Quinn, Caitlin, Catherine, Aidan, Sean Patrick, Emma, and Madeline. He is also survived by siblings, John G. Harron, Sheila Harron, and Bridget Harron. A memorial mass will be celebrated by Rev. Joel Konzen, S.M., on Thursday, September 27th, 10:30 A.M. at All Saints Catholic Church, 2443 Mount Vernon Road, Dunwoody. In lieu of flowers, donations may be sent to All Saints Catholic Church Saint Vincent de Paul Society. Please sign online guestbook at www.fischerfuneralcare.com  Arrangements by Fischer Funeral Care, Atlanta, 678-514-1000