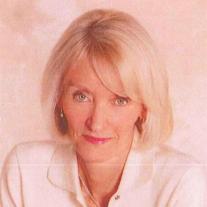 Reudean Ravlin, 70, of Spruce Creek, passed away peacefully, on September 21, 2012. Born in Charleston, South Carolina, she grew up in Orlando, graduating from Edgewater High School and Orlando Junior College. She also later graduated from the University of Florida. A Celebration of her life will be held at 11:00am, September 29, 2012 in the Spruce Creek Fly-In at 224 Cessna Blvd. Reudean was known by family and friends as a very compassionate and determined woman. As a fighter she was tough on the outside and as soft of a soul as the color pink that she loved to surround herself in. The greatest love in her life was her husband and family, followed by her love of flying and dance. As a young woman, she was a flight attendant with Eastern Airlines for seven years where she met her loving husband. Reudean was an active member of the Pilots Association, International 99 Women of Flying, EAA Chapter 288, the Women of Wings in Spruce Creek, and the NRA. Reudean had a love for dance, and was an active member of Spruce Creek Creekettes. She was preceded by her parents, Jacob Daniel & Mildred P. Sulton, Betty Jean Muldrow, sister, Jacob Daniel Sulton, brother. She is survived by her husband, F. W. (Jug) Ravlin; brother Willard Wild Sulton (Mary) of Orlando; niece Mary Reudean Morrison (Jeff) of Orlando; nephew Jacob Daniel Sulton (Megan) of Ft. Myers; two grand nephews and one grand niece; and sister-in-law, Jane Sulton of South Carolina. In lieu of flowers donations in her memory may be made to the American Cancer Society or Port Orange Presbyterian Church (S. Clyde Morris Blvd.). Condolences may be shared with the family at www.lohmanfuneralhomes.com Arrangements under the careful direction of Lohman Funeral Home Port Orange.
Condolences may be sent to her husband at:
Captain Frederick W. "Jug" Ravlin
P.O. Box 291184
Port Orange, FL 32129-1184

~ IN MEMORY ~
Reudean Ravlin, wife of NEA/DL Capt. Fred Ravlin
August 6, 1942 ~ September 14, 2012
Word has been received of the passing of Reudean Sulton Ravlin, wife of retired NEA/DL Captain Fred Ravlin.  I have not seen an obituary to date but I believe Reudean was 70 years of age at the time of her passing.
Arrangements are not known at this time.
Survived by her husband Captain Fred Ravlin, personal condolences may be sent to
PO BOX 291184 ,  PORT ORANGE FL 32129-1184
Captain Ravlin can also be reached at
(386) 788-9447  or   theravlins@aol.com
Posted by Unknown at 12:31 AM