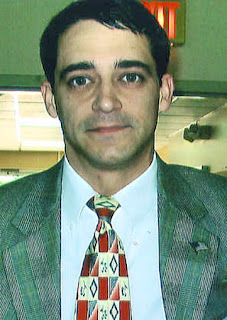 Update to our PCN posting dated September 4, 2010 and the tragic death of ATL DL dispatcher Jamin Coyle.  Jamin worked in Flight Support, Dept. 022, ATG.  Teenager Ryan Ray has now been convicted of robbing and murdering Jamin.   Ray could be one of the first juveniles sentenced to life in Florida. Ray was 16 when he took the life of Jamin Coyle, age 39.  The U.S. Supreme Court recently ruled that minors may be sentenced to mandatory life without parole.
These articles and information will be posted on our blogspot at
http://pcnflightwest.blogspot.com/

LANCASTER — Jamin Monte Coyle, 39, of Lancaster, was tragically taken on Sept. 1, 2010 in Leesburg, Fla.
He was born on March 5, 1971, in Richmond, Ind. He was the wonderful son of Joe and Shirley Coyle of Lancaster.
Jamin was a proud and dedicated employee of Delta Airlines, where he was based out of Atlanta as a pilot and dispatcher in control. His other love was baseball, where the Red Sox ruled.
Also surviving are two sisters, Connie (Steve) Maupin of Monticello and Carrie Johnson of Lancaster; two brothers, Michael (Sandee) Coyle of Nicholasville and Jared (Brenda) Coyle of Flemingsburg; a grandmother, Euginia Young; five nieces and nephews, Sarah (Chet) Roller, Aubry Coyle, Garett Oakes, Shannon (Katie) Poynter and Jalen Coyle; three great-nephews; three great-nieces; and a beloved dog, Wishbone.
He was preceeded in death by a sister, Cynthia Rae Coyle; and grandparents, Ray Young and Alfred and Marie Coyle.
Funeral services will be 2 p.m. Monday at Spurlin Funeral Home Chapel in Lancaster with Bros. Frank Foster, Cecil Himes and Jalen Coyle officiating. Visitation is 5-9 p.m. today at the funeral home.
Active pallbearers will be Shannon Poynter, Jalen Coyle, Chet Roller, Steve Maupin, Garett Oakes and Mike Christopher. Honorary pallbearers will be Lonnie Napier, Billy Spurlock, Micky Rhodus, Aubry Coyle, Steve Clay and Sarah Roller. Burial will be in Lancaster Cemetery.
Jamin was a precious son, brother and uncle who will be missed.
spurlinfuneralhomelancaster.com
===================================================