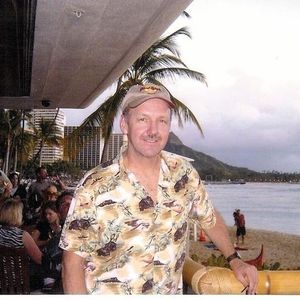 
Jim, age 55, was born May 12th 1957, at Methodist Hospital in Dallas, Texas to parents Frances and Bill Thompson. Jim graduated from The University of Texas at Arlington in 1979 and immediately entered the US Navy and Aviation Officer Candidate School located at NAS Pensacola, Florida. Jim earned his "Wings of Gold" as a Naval Aviator in May 1980 following flight training at NAS Whiting Field and NAS Corpus Christi, Texas. Following his assignment to fly the Navy's P-3B Orion, Jim began his service at the Replacement Air Group Squadron at NAS Moffett Field, California, and subsequently transferred to Patrol Squadron Seventeen at NAS Barbers Point, Hawaii flying "Cold War" anti-submarine and reconnaissance missions throughout the western Pacific region. During this time, he completed several deployments and numerous detachments throughout the theater, including NAS Cubi Point, Subic Bay, Philippines; Diego Garcia, Indian Ocean; Kadena Air Base, Japan; Won Pat Air Base, Agana, Guam; and NAS Adak, Alaska. While in Honolulu in 1982, Jim met Julie Rose. They were married in Hawaii in June 1984. One month after their marriage Jim was transferred back to NAS Pensacola, Florida for his final year in the Navy. In Pensacola he served as an Instructor Pilot and taught Ground School for the Navy's Naval Flight Officer Training Program. He was released from active duty as a Lieutenant in the summer of 1985 and moved back to Dallas before joining Delta Airlines in September of 1985. Jim began his career with Delta as a Flight Engineer, on the 727. He subsequently served in several positions and a variety of aircraft, including First Officer on the 727, Captain on the 737 and as Captain of the MD 88/90. Jim ended his career with Delta as a Captain flying the Boeing 767-400 internationally when he became ill in August of 2012. Jim's son, Jackson, received his Audio Engineer Degree in Minneapolis in June of 2011, and currently resides in Austin, Texas where he teaches a private audio engineer program while recording and producing on his own. Jim's Daughter, Jeana, is currently a Senior at Colleyville Heritage High School and will attend the business school at The University of Texas at Austin in the Fall of 2013. JL was a loving father, husband, brother, son, and friend. He always had a way of bringing joy to everyone he came in contact with. Besides flying, he was also very passionate about motorcycles, whether riding, racing, or watching. He was loved by many and will truly be missed.