Update with notice of services.....
The Cawley family has advised us of memorial services celebrating the life of Captain James Cawley.....please see below....thank you/CF 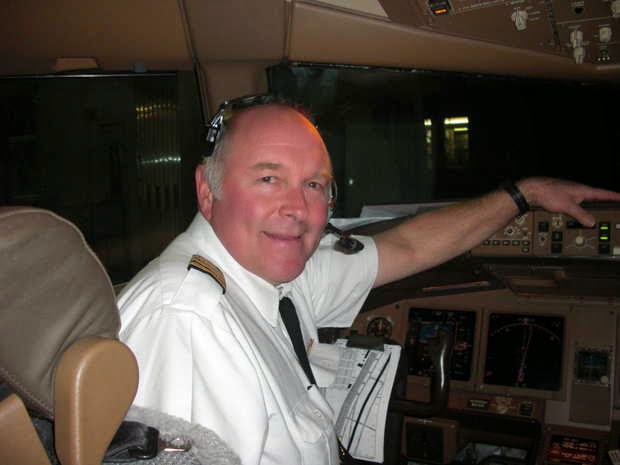 http://www.thenewstribune.com/2014/06/05/3229388/family-says-victim-in-buckley.html
Jim Cawley could fly a plane before he could drive a car, his family said Thursday.
Crawley, a 62-year-old retired Delta Airlines pilot, was one of two people killed Wednesday when a small plane crashed near Buckley, where both men lived. The other victim was 72-year-old Rodney Richardson.
The World War II-era Navy plane they were flying went down about 3:30 p.m. near the 9200 block of 258th Avenue East. Both men died instantly.
Cawley was friends with Richardson, and had just bought the plane from him, possibly as recently as Wednesday morning, said Kelsey Tomascheski, a Cawley family friend and spokeswoman. The men took the plane up in the morning without any trouble, she said. The craft went down shortly into their second flight of the day.
The National Transportation Security Board is investigating what caused the crash, a review that generally takes weeks or months. The agency did not return a New Tribune call Thursday regarding which man was piloting the plane, or whether they had been co-piloting the craft at the time of the crash.
Both men lived on the private airstrip in the Buckley area where they flew out from Wednesday, Tomascheski said.
The News Tribune was unable to reach anyone in Richardson’s family. KING-TV reported he was also a retired commercial pilot.
Cawley retired in October 2012, after logging more than 30,000 hours during the more than 30 years he worked for Delta, his family said in a statement. He is survived by his wife Cheri of 35 years, and sons Clint, 31, and Curt, 29. Both sons work in aviation, and have flying certifications.
Cawley’s focus in retirement was his love of the outdoors and restoring World War II-era planes, they said.
“The Cawley family is devastated by this loss, but finds comfort in the fact that Jim passed away doing what he loved,” the statement said.
He used to restore the vintage planes with his father and two brothers, said Floyd Nearhood, who was friends with Jim Cawley from the time they were growing up as teenagers near Buckley.
“Each one of the boys, when they hit 16, they flew,” he said. “For them, it was just kind of matter of fact. The whole community is just in disbelief that this could happen to Jim. He was such a good, cautious pilot.”
Nearhood said he didn’t know Richardson well, but knew he and Cawley were friends.
Cawley’s father was a decorated World War II veteran held for a time in a Japanese war camp, said Burton Haugen of Buckley, who said he knows the family and rented land from Jim Cawley for his organic dairy farm.
“He was a good guy,” Haugen said. “I knew him as really nice and sincere.”
Haugen was in a field, pulling a calf Wednesday, when he heard the plane have problems.
“It flew over and it was sputtering and backfiring and he was pretty low,” he said. “I said to my son, ‘They’re going to crash if they don’t pull up.’ I thought they might try to land in one of my fields.
“The guys are such good pilots it’s hard to fathom them crashing.”
===================================================================


~ IN MEMORY ~
DL Capt. James R. Cawley
October 7, 1951 ~ June 4, 2014
News of a tragic accident has been received .... retired WA/DL pilot Captain James Robert Cawley and Boeing retiree/pilot Rodney Richardson both died yesterday afternoon when the plane they were flying unfortunately could not make it to open land and crashed into a wooded area near Bonney Lake WA.  No one was hurt on the ground.  The two men were friends and neighbors ...  the fatalities have shaken the tight-knit aviation community in Buckley WA.  Captain Cawley joined Western Airlines just before the WA/DL merger on  09-22-1986 and retired with Delta Air Lines in September 2012, based 030/PDX.  He is survived by his wife Cheri and their sons.

http://www.king5.com/news/local/Men-who-died-in-Pierce-County-plane-crash-were-retired-pilots-262026171.html
Men killed in Pierce County plane crash were retired pilots
BONNEY LAKE, Wash. -- Two men killed in Wednesday’s crash of a World War II-era plane in Pierce County were retired commercial pilots.
Jim Cawley retired from Delta Airlines two years ago, according to his son, Clint Cawley.
Rod Richardson had owned the plane for the last 12 years and flew it about 600 hours without a problem.
Cawley bought the plane from his friend Richardson this week.
The two took it out for a morning flight so Richardson could teach Cawley about the plane. They had no problems in the morning, but shortly after taking off in the afternoon, it went down about a mile from the Cawley family’s private airstrip near Bonney Lake in Buckley.
NTSB investigators used a crane to drag the plane wreckage out of the woods Thursday. The investigation could take months.
---------------------------------
2 dead in World War II-era plane crash near Bonney Lake
By KOMO Staff   Published: Jun 4, 2014   Last Updated: Jun 4, 2014
http://www.komonews.com/news/local/1-dead-in-small-plane-crash-near-Enumclaw-261899591.html
BONNEY LAKE, Wash. -- Two people were killed Wednesday afternoon in a World War II-era plane crash near Bonney Lake.
Pierce County Sheriff's spokesman Ed Troyer confirmed the fatalities in the crash that is reportedly in a wooded area near 245th Avenue and Highway 410. The FAA says the plane was a North American AT-6C.
At roughly 3:30 p.m., several people reported seeing a small aircraft sputtering and flying low before going down, according to Troyer.
ne of those witnesses was Buckley Police Chief Jim Arsanto, who saw the plane flying low over Highway 410.
"The plane appeared to be having engine trouble, made a big loop... the engine kept dying and restarting," Arsanto said. "It made a complete circle to head back to the airport where it lifted off... and it went into a patch of trees."
He dialed 911 then headed in to the scene.
First responders arrived on scene and found two people in the wreckage. The men were later identified as 62-year old James Cawley and 72-year-old Rodney Richardson.
There is no word what caused the crash and it does not appear anyone else was hurt.
----------------------------------
http://www.king5.com/news/local/Two-dead-in-Pierce-County-small-plane-crash-261901691.html
by KING 5 News
Posted on June 4, 2014 at 4:23 PM   Updated yesterday at 11:51 PM
BUCKLEY, Wash. -- Two men died after their World War II-era plane crashed near Bonney Lake in Pierce County Wednesday afternoon.
The Pierce County Sheriff's Department received multiple reports around 3:30 p.m. of a plane down in the 26000 block of 96th Street E. Witnesses reported a small plane sputtering, flying low, then going down in a wooded area.
"I seen it go over. I thought it was going to land in the field, but it didn't. It crashed in the woods. Big explosion. It shook the ground I was standing on," said a witness.
Pierce County officials said the plane was a 1946 Navy trainer plane that had recently been restored and repainted. It was headed toward an air strip about a mile towards of Bonney Lake. The World War II-era plane crashed in a heavily wooded area just north of Bonney Lake, and officials say it may require a helicopter or crane to recover the aircraft.
The Pierce County Medical Examiner's office identified the victims as Rodney Richardson, 72, and James Cawley, 62, both of Buckley.
According to the FAA registry, the plane was registered to Richardson. We have not been told who was piloting the plane at the time of the crash.
FAA and National Transportation Safety Board have been notified and are at the crash scene.
From: Dick Deeds Sent: Thursday, June 05, 2014 10:24 AM   To: pilots@wallybird.com
Subject: Passing of retired WAL/DAL Captain Jim Cawley


Thanks to Scotty Johnson for this sad information.
It is with deep regret that I must pass along the passing of another one of our brothers.
Dick

It is with great sadness that I report my dear friend Captain Jim Cawley has gone west leaving  family and his friends .Jimmy loved what he did and did what he loved,, to fly .His aircraft had a engine failure and was unable to land in the clear.May god bless Jimmy and his family ,sincerely
Capt Scotty Johnson WAL 01-10-77  B777 DAL
Posted by Unknown at 9:34 PM