Notification with the passing of USMC Major retired WA/DL pilot Captain Richard Charles Bradfield, age 77.  Captain Bradfield joined Western Airlines 11-25-1968 and retired with Delta Air Lines, based SLC.   Captain Bradfield was widowed in June of 2008 with the passing of his wife Windy.  He had most recently resided at
2574 Reserve St.,  Erie  CO 80516-2505  ...  (303) 494-3132
To view/sign the online guestbook please visit the funeral home website at http://www.darrellhowemortuary.com/  or
http://www.legacy.com/obituaries/dailycamera/obituary.aspx?n=Richard-Bradfield&pid=172988480
Arrangements were entrusted to Darrell Howe Mortuary of Lafayette CO (303) 665-5518
with interment at Fort Logan National Cemetery in Denver CO. 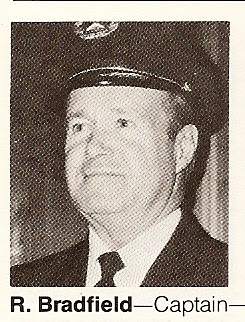 Dick Bradfield was born and raised in the Four Corners area of Colorado near Cortez. He was the great grandson of homesteading Colorado farmers and ranchers. Dick graduated from Western State College where he met his wife, Windy. While attending Western, Dick was an intercollegiate skier, wrestler and baseball player. Following college, Dick and Windy lived around the U.S. while he served as an officer and pilot in the U.S. Marine Corps. While in the Marines, Dick flew A-4 Skyhawks, including service as a pilot in Viet Nam. After leaving the Marines, Dick and Windy settled in Boulder, Colorado with their family. Dick continued flying as a Captain and pilot for Western and Delta Airlines until his retirement. He spent his most recent years biking, hiking, traveling, golfing, serving his community through Rotary, and supporting his grandchildren and great-grandchildren's various activities. He passed away quickly following a stroke. Dick was preceded in death by his wife, Windy. He is survived by his two sons, Rich and Dan, and his siblings Bob Bradfield, Dave Bradfield, and Jeanine Valdez. They and his extended family, including daughters-in-law, six grandchildren, and five great-grandchildren, will miss him dearly. He will also be missed by Lou Ann Dixon, who brought adventure and companionship to him during the past five years. Dick will be buried alongside Windy at Ft. Logan National Cemetery. Dick's big heart and generosity will be remembered by all he touched.
In lieu of flowers, charitable contributions may be made in Dick's memory to Warren Village, 1323 Gilpin St., Denver, CO 80218, a residential program for homeless single parent families.
Darrell Howe Mortuary   http://www.darrellhowemortuary.com/
Published in The Boulder Daily Camera on Oct. 30, 2014.
- See more at: http://www.legacy.com/obituaries/dailycamera/obituary.aspx?n=Richard-Bradfield&pid=172988480#sthash.Il6lpiGt.dpuf
-------------------

Helen W. (Windy) Bradfield, beloved wife, mother and business woman died in Longmont, Colorado Wednesday June 11, 2008 at the age of 68. The daughter of Bernice Groft Murr and Alfred Washington (Fred) Murr, Windy (Helen Winifred Murr) was born in Colorado Springs, Colorado on September 20, 1939. She was the first child of the second marriage for each of her parents. The family lived on a dairy farm near Peyton, Colorado. Windy was an excellent student, graduating from Ellicott (Colorado) High School as class valedictorian. She attended Western State College in Gunnison, Colorado on scholarships, beginning at the age of 16. While at Western State, she met her husband Dick (Richard C.) Bradfield. Windy and Dick were married February 1, 1958 in Cortez, Colorado. In her married life, she moved her family a number of times, from Colorado to Florida, Texas, California (twice), South Carolina and once again to Colorado. Windy had many careers over her life: military wife, mother, florist, vocational instructor, consultant, executive recruiter, and business owner. Military wives serve with their husbands; Windy served with Dick in the U.S. Marine Corps. She kept the home fires burning, caring for sons Rich and Dan, while Dick served year-long tours on two separate occasions in Japan and Viet Nam as a Marine pilot. As her family matured, Windy reentered the workforce and became a successful florist and later taught floral design and business management at the Cliff Mann Floral School in Denver. She then built a successful independent consulting business from scratch for the floral industry. Never one to rest on her laurels, Windy began an Executive Recruiting career in 1986 with Management Recruiters of Boulder. There she was highly successful, earning accolades as a top recruiter with the world's largest recruiting organization, MRI Network. At the time of her death, Windy was one of the owners of Management Recruiters of Boulder. Perhaps most importantly, Windy loved to have fun. She was the consummate hostess, serving incredible meals and hosting family, friends and neighbors at holiday get-togethers, family parties and neighborhood parties. She also kept Christmas. She would carefully and thoroughly decorate her house in a new theme and color just about every year. She was very generous and any overnight guest would have a Windy-created stocking and a thoughtful gift. Christmas morning would be complete with a large gourmet brunch, champagne and a living room floor completely covered with gifts and discarded wrapping paper. She also loved to play as a golfer (she even shot a hole-in-one!), water skier, snow skier, softball player, bridge player, and teller of shaggy dog stories and other jokes. Windy is survived by her husband, Dick Bradfield, sons Rich Bradfield of Louisville, CO and Dan Bradfield of Broomfield, CO, their respective wives, Jennifer and Kathleen, six grandchildren, one great grandchild, sisters Edna Mae Hunter (Lafayette, CO), June Heimsoth (Colorado Springs, CO), and brothers Jim Murr (Spokane, WA) and Fred Murr (Peyton, CO) and numerous nephews and nieces. Windy was preceded in death by her parents and sister, Marjorie Bradley. Memorial services will be held 2:00 P.M. Friday June 20, 2008 at the Church of Jesus Christ of Latter Day Saints (LDS), 701 West South Boulder Road in Louisville, CO. A Celebration of Life will follow at the family residence. A private interment will follow at Fort Logan National Cemetery. Funeral arrangements are being handled by M.P.Murphy & Associates, Funeral Directors of Boulder. Flowers are welcome, as are contributions in Windy's name to the American Lung Association. 5600 Greenwood Plaza Blvd. Ste. 100 Greenwood Village, CO 80111.