~ IN MEMORY ~
NC/RC (NWA) Capt. William D. ‘Bill’ Mooney
October 19, 1929 ~ October 6, 2014
The Flying Mooneys.....aviation has been in the Mooney family for many, many years.  In 1972 the Butte, Montana (BTM) airport was renamed the Bert Mooney Airport honoring Bill’s father WAL Captain Albert S. ‘Bert’ Mooney II who died in 1972.  Bill’s brother Brien was a pilot for Western Airlines for a time and also Eastern Airlines, Bill’s brother Bert Mooney III was a pilot for Frontier, John was a commercial pilot with a degree in aeronautical engineering.  All four sons were graduates of the University of Utah.  All learned to fly at early ages in Salt Lake City, and all were taught by Western Airlines instructors.  Their mother Johanna, not one to be left behind, was also a pilot.  Bill quite likely retired from Republic prior to the merger with Northwest (age 60).  He was widowed in December 1988 with the passing of his wife Mary.  Captain William Donald Mooney, nearing his 85th birthday, had most recently resided in Bloomington MN.
Thank you,
~ Carol for the PCN
Memorial blogspot   http://pcnflightwest.blogspot.com/

Age 84, of Bloomington, MN passed away peacefully, surrounded by his family, while in care of N.C. Little Hospice in Edina on October 6, 2014. Born October 19, 1929 in Butte, Montana to the late Albert (Bert) and Johanna Mooney III. Bill graduated from Judge Memorial High School in Salt Lake City and attended the University of Utah. He served in the Armed forces as a marksman where he received an honorable discharge. Bill pursued his family's passion for flying and became a Captain with North Central, Republic, and Northwest (Delta) Airlines. Bill was a dedicated friend and sponsor to many in AA, and would have celebrated his 46th year of sobriety on November 20th. He was an avid fly fisherman; loved raising butterflies, gardening, and bird watching. He was a loving and dedicated Father and friend who will be greatly missed by all. He will be joining the love of his life, the late Mary George Mooney. He is preceded in death by his brothers Albert and Brien Mooney. He is survived by his three children, Erin (Todd) Johnson of Richfield, Shawna (Chris) Dudek of St. Louis Park and Darby (Lisa) of New Prague; brother, John (Jay); along with 3 Grandchildren: Elissa (Andre) Jaeger, McKayla and Hanna, and one Great Grandchild, Jamal. Memorial Service will be held at 10 am on Friday, November 7, 2014 at the Historic Fort Snelling Chapel. Visitation will be one hour prior to service at the chapel. Interment with Honors immediately following at Fort Snelling National Cemetery. The service will be officiated by Reverend Jack Heidenreich. Funeral arrangements are provided by The Cremation Society of Minnesota.
http://en.wikipedia.org/wiki/Bert_Mooney_Airport
Bert Mooney Airport ( BTM) is a public airport three miles southeast of Butte, in Silver Bow County, Montana. It is owned by the Bert Mooney Airport Authority.
The airport name was changed in 1972 to honor Bert Mooney, an aviator from Butte who was the first to fly mail into Yellowstone National Park in 1935. Prior to this the airport was Butte Municipal Airport (from its opening in 1926) and Silver Bow County Airport from 1960-1972.
(picture below circa 1960, Western Flight Times) 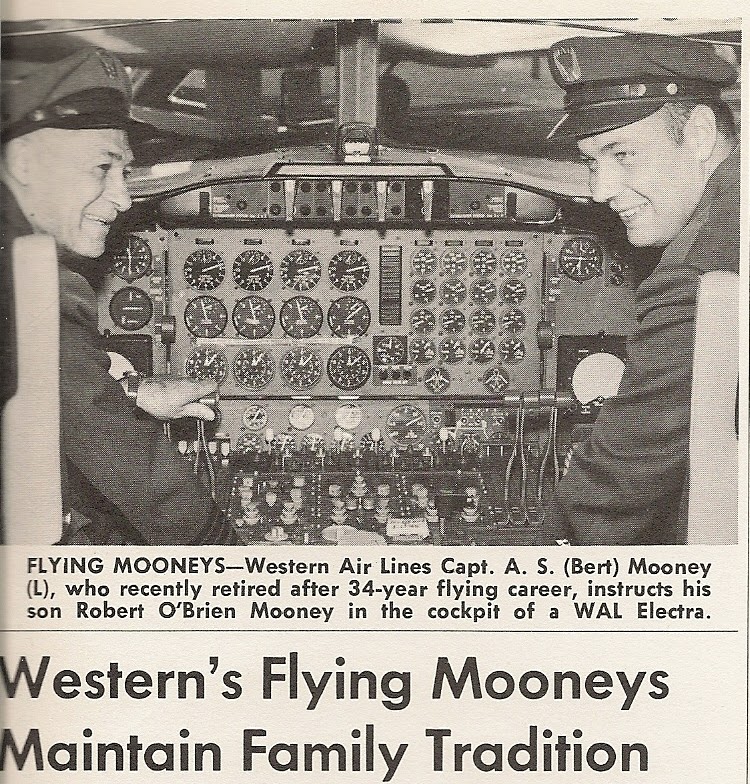 Johanna Murray Mooney, age 93, died January 29, 1993 in Salt Lake City.
She was born October 1, 1899 in Butte, Montana to William J. and Johanna Cudahy Murray of Butte. She attended local schools and worked as a secretary prior to her marriage to Bert Mooney, aviation pioneer, in 1919.
She was preceded in death by her husband Bert and a son, Albert III. Survivors include sons, J. Murray and his wife Bernice, of Salt Lake City; William D. of Minneapolis, Minnesota; Brien and his wife Joan of Chicago, Illinois; 15 grandchildren; 11 great-grandchildren; and a niece, Dorothy Crowley and her husband Joseph of Missoula, Montana.

Robert O'Brien Mooney January 24, 1931 ~ October 28, 2012 Robert O'Brien Mooney (Brien) passed away on October 28, 2012 in Chicago, Illinois. Brien was born on January 24, 1931 in Butte, Montana to Bert Mooney and Johanna Murray Mooney, the youngest of four boys John (Jay), William (Bill) and the late Albert (Al) Mooney. They grew up in Butte before moving to Salt Lake City in 1936. Brien graduated from Judge Memorial Elementary and High School, and the University of Utah. As a senior in high school, he played on the football team that won the first State championship for Judge and went on to play football for the University of Utah Utes. Brien married Joan Wagstaff and they were blessed with their son Kevin. During the Korean War Brien served our country in the Army, along with his brother Bill. Brien later pursued an extensive flying career, and served as a Captain with Eastern Airlines. During his retirement, he resided in Wheeling, Illinois; and enjoyed fishing in his favorite spots on the Big Hole, Wise River and Georgetown Lake in Montana. In heartfelt grief family and friends gathered together from Minneapolis, Phoenix, Bloomington, Wheeling, Chicago and Salt Lake City to express their honor and respect for the kind and loveable Brien. A viewing took place on November 1, 2012 and a funeral Mass the next day in Chicago at the Church of Saint Ita, followed by burial at Abraham Lincoln National Cemetery.
Posted by Unknown at 11:21 PM