I wish to thank Susan, daughter of the late Capt Bill Leahy, for sending in this honoring tribute of her dad who has made his final Flight West.   Please send any family condolences to Susan at s.leahy@sbcglobal.net and she will forward.  Mark 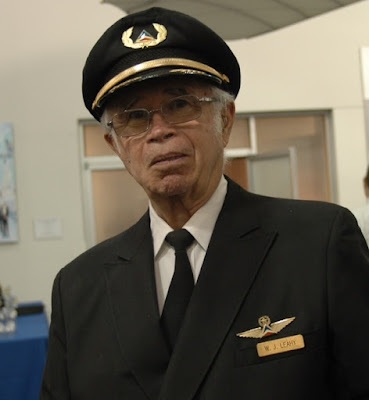 Photo while he is docent at Hiller Aviation Museum in California.

I was going through my father's emails after he passed and found that he was a member of your group. It seemed that it would be fitting for me to forward his memorial to you to post.  He loved everything to do with aviation, and maybe someone who knew him will see it.

Thank you for your consideration,
Susan Leahy - daughter

All of the siblings attended St. Michaels Grammar School which they considered home away from home. Bill became an Alter Boy, a great honor that required him to learn Latin prayers, songs and, supposedly, he was to set a good example for the congregation.  Instead, he was quite a prankster - adding "stink bombs" to the incense in the thurible, changing wine into water, etc. He had many devilish stories about his Alter Boy days.  His sister Kitch has tried to assure the family that his ability to tell "tall tails" was also developing at this time of his life.

During his tenure at Holy Trinity High School he met Tony Akelis. They were great friends who enjoyed working on cars together.  In addition to body repair work, painting and electrical wiring, Bill liked to "modify" things.  He used a tree limb in front of his house to create a pulley system that allowed him to pull a powerful engine out of one car, then install it into his smaller car. He told stories about drag racing for pink slips. No wonder he enjoyed the movie Grease!

Bill joined the Navy towards the end of the Korean War.  When he signed his commitment papers he thought he would be attending pilot training.  As it turned out, that program was canceled and he spent his time in the maintenance department.  He became quite adept at fixing Link Training Flight Simulators. Working several odd side jobs, he paid for flight training himself.  In addition to building flight hours fish spotting, he enhanced his flying accuracy by dropping small packages of baking flower (flower bombs) on the local nudist colony.

Once Honorably Discharged from the Navy in 1960, Bill followed a friends advice and became a Ground School Instructor at United Airlines.  He moved to Denver Colorado with the desire to transfer to the flight line as a pilot as soon as possible.  Unfortunately, his eyesight didn't meet their minimum requirements at that time.  When he became frustrated with his situation, United appeased him with a new aircraft Type Rating. He enjoyed that because the training was done in the actual aircraft, not in the simulator as is done currently.

One afternoon in July 1963 at a pool party on Adams Street, he met his wife of 52 years, Jean Bell from McPherson Kansas.  She too had moved to Denver for a career opportunity as an Emergency Room Nurse.  They were married at Grace Bible Church in Aurora, Colorado April 2, 1964. Travel became part of their lifestyle! This was the era of glamorous air travel and they embraced the opportunity.

Another fateful day was in May 1966.  The Western Airlines DC10 simulator broke down.  Desperate to repair it, they reached out across the street to United Airlines. Bill quickly volunteered to help, but on the condition that if he fixed it successfully, he could attend pilot training at Western. The agreement was made, the simulator fixed, and Bill was in class as a Flight Engineer on the DC6!

Working for Western Airlines was a perfect fit! "Wild Bill" Leahy wore his cowboy boots and big belt buckles to work,  bolo ties and western shirts at home.  He had an amazing career, flying the DC6, Lockheed Electra, Boeing 707, 737 and 727. Two children were born in Colorado: daughter, Susan Jean and son, William John Junior.  When the chance to upgrade to Captain on the 737 became available in San Francisco CA in 1976, the family moved to Redwood City, where their third child Michael Thomas was born. Delta Airlines purchased Western Airlines in 1987 allowing him to retire off of the next generation aircraft Boeing 757/767.

Helping children build self confidence and drive to experience what the world has to offer was important to Bill. He visited Roy Cloud Elementary School at least once a year in his pilot uniform, sharing his passion for aviation. He was continuously enthralled by computers and brought that knowledge to several local schools.  He was an active member of the Redwood City Elks Club where his children received tennis and golf lessons as well as being participants of the swim team. He worked with the Boy Scouts frequently and took the kids to the beach to shoot model rockets. If there was an opportunity to work with children he always made time for it.

Peninsula Covenant Church became an important location for fellowship and Sunday services.  Bill enjoyed being involved in several programs, Mission Aviation Fellowship was a natural attraction for him.  The loss of eldest son Bill Jr. during an aircraft delivery was difficult.  The support from church staff and parishioners was amazing.

Health issues began to appear in 1992 and caused Bill's early retirement in 1995. Never daunted, he became a volunteer at FILOLI and at the Hiller Aviation Museum.  He was a highly requested docent and worked as a mentor in the cockpit setting of the Boing 737 & 747. Several of his wards have kept in touch with him as they continue their own careers in aviation.

Stanford Hospital became increasingly prevalent in Bill's life. Each time he recovered from a serious illness, another would appear. After twenty four years of watching his health decline, it was a shock when his wife Jean was diagnosed with pancreatic cancer, then passed away one month later.  He was a survivor.  No matter what happened, he always had a positive attitude. Even with stage four cancer through out his body he expected the doctors to "fix him".