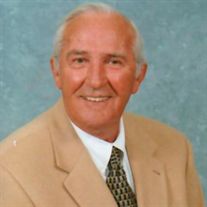 Our apologies to Captain Thomas's family for this belated posting.... military veteran, Delta Golden Wings member, retired Delta pilot Captain Russell Lon Thomas Sr. was 75 years of age at the time of his passing October 18th of 2015.  Captain Thomas joined Delta Air Lines 04-03-1967 and was based 030/ATL at the time of his retirement.  He is survived by his wife Lena Lou.  Captain Thomas's obituary may still be viewed online at  http://www.mayeswarddobbins.com/obituaries/Russell-Thomas-Sr/#!/Obituary   Services for Captain Thomas were held in Marietta, Georgia with interment at Georgia National Cemetery.  Personal condolences may be sent to the family at
1521 Cheatham Hill Rd SW , Marietta, GA 30064-4121   ...  (770) 424-6690
Thank you,
~ Carol for the PCN
Obituary for Russell Lon Thomas, Sr. ............................
Russell Lon Thomas, Sr., 75, of Marietta passed away Sunday, October 18, 2015.
A Funeral Service will be held 2:00 p.m. Wednesday at First Presbyterian Church Sanctuary in Marietta with Rev. Denise Beltzner officiating. Interment will be in Georgia National Cemetery.
Russell graduated from Mississippi College where he played football. He served five years in the Marines as a helicopter pilot. After military he went to work for Delta as a pilot. When he retired after 30 years of service as a captain, he was on the 757-767. He was an avid outdoorsman who enjoyed quail hunting with his brothers and son in Mississippi. Russell was a member of First Presbyterian of Marietta for 40 years. He was a loving husband, father and grandfather.
Survivors include his wife of 53 years, Lena Lou Thomas of Marietta; one son, Russell Lon Thomas Jr. and his wife, Kellie of Marietta; one daughter, Jennifer Thomas Gibson and her husband, Jim of Jamestown, NC; his mother, Lula Mae Thomas of Duck Hill, MS; two brothers, David Dee Thomas and his wife, Carolyn of San Rafael, CA, Stephen Jordan Thomas and his wife, Wanda of Eupora, MS; six grandchildren, Matthew, Sam and Annie Gibson, Rachel, Hannah and Russell Thomas III; brother-in-law, Tommy Linn and his wife, Sheila of Cave Creek, AZ.; several nieces and nephews.
In lieu of flowers, contributions may be made to a charity of your choice.