Celebration of Life event will be held July 15th, what would have been Tex’s 86th birthday.
Location: The Villa, 510 East Katella Ave., Orange, CA 92867

Donald Eugene "Tex" Stevenson
July 15, 1931 ~ June 4, 2017
Following a brief illness, Donald "Tex" Stevenson left our earthly home June 4, 2017.
He is now resting comfortably with our Father, having earned a new set of wings. "Tex" was born in San Antonio, Texas on July 15, 1931 to Odes Pervat and Fawn Taylor Stevenson. He spent his early years in San Antonio, where in the fourth grade he met Billy Sledge. Theirs was the definition of a lifelong friendship, with weekly phone calls right up to last month. During his high school years, the family moved to Sweet Home, Oregon and the new kid in school got a lifelong nickname. He attended Lewis & Clark College on a Football Scholarship. After graduation in 1950, he joined the United States Marine Corps. He served as an aviator in the Marines in both active duty and the reserves until his retirement as a Lt. Colonel in 1972. Many of his most cherished friendships were formed while in the Marine Corps. Once a Marine, always a Marine. In addition to his military service, Tex flew for Western/Delta Airlines from 1959 to 1991. Not known to be idle, Tex was a Volunteer Fireman in Villa Park, and worked for the L.A. County Jail. Yes, he was an Airline Pilot, Fireman, AND Policeman. Most little boys only dream of this, but Tex made his dreams come true.
Tex went on to dream and live even bigger. During a summertime party, he met Marcella "Martie" Saasta, a TWA Hostess, the girl who laughed at all of his jokes. Following a four month courtship, they married on January 26, 1957. It was Martie who suggested Airline Pilot as an occupation after he completed his military duty. Throughout their 60 year marriage, they shared a love for world travel, voracious reading, and challenging crossword puzzles. They created loving homes in Anaheim and Villa Park California, Park City Utah, and ultimately in La Quinta, California. They explored each of these cities with gusto, made many friends and lasting memories. Tex was an avid journal writer, runner, skier (both snow and water), a so-so golfer, good tennis player, and an amazing friend. His humor and wit, his big laugh, and his giving heart will be missed.
Tex often shared that his greatest success was his loving family. He was destined for greatness, and the legacy of family and friends is a testament to what a great life he lived. Always curious, always learning, he made a better life for himself and his family. He is survived by wife Martie, their three children; Patti S Sims (Randy), Michael Stevenson (Debbie), Barbie Stevenson-Rodriguez (Omar "Joe"), six grandchildren, Nolan, Stephanie, Taylor, Andy, Ashleigh, and Spencer. And three Great-Grandchildren, Hunter, Grey and Harper.
A Memorial Service will be held in Orange County at a later date. In lieu of flowers, please consider a donation to Soldiers Organized Serves. SOS is a local La Quinta charity serving service members and their families. Always one to take to the skies, we know Tex is soaring in heaven.
Semper Fi
To view and sign this guestbook, please visit: desertsun.com/obituaries
Published in The Desert Sun on July 2, 2017.
~~~~~~~~~~~~~~~~~~~~~~~~~~~~~~~~~~~~~~~~
~ IN MEMORY ~
Military veteran, WA/DL CAPT. DONALD EUGENE 'TEX' STEVENSON
July 15, 1931 ~ June 4, 2017 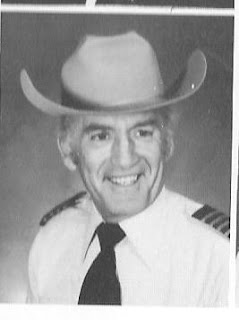 News has reached us with the passing of retired Western/Delta pilot Captain Don E. ‘Tex’ Stevenson, age 85.  Captain Stevenson joined Western Airlines 06-22-1959 and retired with Delta Air Lines, based SLC.  He is survived by his wife Martie.  The family writes that
a Celebration of Life event will be held later on July 15th in California on what would have been his 86th Birthday.  More details on that will follow.  In lieu of flowers, please consider a donation in Capt. Stevenson’s memory to Soldiers Organized Services/SOS, a nonprofit organization that supports Marines and their families:   SOS, 57539 Santa Rosa Trail, La Quinta, CA 92253.... (760) 777-8955.
Personal condolences may be sent to the family at
45160 Seeley Drive Lot 140 ,  La Quinta, CA  92253-6890.
As more information is received we will be sure to pass it along.
Thank you,
~ Carol for the PCN
Date received: Sun, 4 Jun 2017 21:37:07
Subject: A Life Well Lived - Donald "Tex" Stevenson
It is with heavy hearts that we share this news, Donald E. ‘Tex’ Stevenson
passed away peacefully this morning. Several of you were aware the last
several months have been a struggle for Tex.  He was a fighter until the
very end, but God had other plans.  In his final days, it appeared he was
still trying to fly planes and we know he is now soaring in heaven.  His
decline was quite sudden, he first took ill in November of 2016.  He had
several bouts of infection, hospital stays, falls, and ultimately his mind
was great but his body failed him.
Many of you have reached out, called, and emailed.  We let him know of your
calls, we read him the cards, letters, and all of the emails.  Your love,
thoughts and prayers strengthened us and made an impact on Tex.  We’ve
always known he was a great Husband and Dad, but your notes and stories
only confirmed he was a wonderful friend, Marine, and airline captain. He
passed surrounded by family.  Not many people are as lucky and blessed as
Tex to be surrounded by love when he came into this world, and surrounded
by love when he left this world.
A Celebration of his Life will be held later this summer in Orange County,
CA on (what would have been) his 86th Birthday, July 15, 2017.  More
details to follow once we have pulled ourselves together.   In lieu of
flowers, please send donations to Soldiers Organized Services.  SOS is a
local La Quinta charity supporting Marines and their families in the area.
Again, we thank you for your friendships, your prayers, your love and your
kind thoughts and stories.  They mean more than we can express at this
time, but you all know how much he meant to us. We thank you for your
support, cards may be sent to Martie at:  45160 Seeley Dr. #140 La Quinta, CA  92253.
All the best,
The Stevenson Family
Posted by death at 11:29 PM