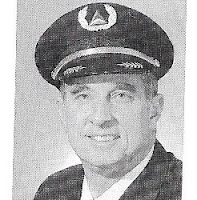 Belated notification with the passing of retired Delta pilot Captain Peter ‘Pete’ de Lanoy Welles, age 73.  Captain Welles joined Delta Air Lines 02-08-1973 and retired with Delta, based FLL.  He is survived by his wife Anna, his daughter and grandson.  Captain Welles’ obituary may still be viewed online at  http://www.mdislander.com/obituary/peter-pete-de-lanoy-welles
Notices below indicate that services for Captain Welles were held July 1st in Southwest Harbor, Florida.
Thank you,
~ Carol for the PCN
Obituary..............................
Peter “Pete” de Lanoy Welles, 73, died peacefully April 29, 2017, at Emory University Hospital in Atlanta, Ga., after a courageous battle with Alzheimer’s disease. He was born Jan. 15, 1944, in New York City, the son of the Rt. Rev. Edward R. Welles II and Catharine van Alstyne Welles.
Pete attended Indian Mountain School in Lakeville, Conn., and graduated from South Kent School in 1962 and from Long Island University in 1966. He served in the U.S. Naval Reserve as a naval aviator from 1968 to 1972.
He married his wife, Anna Roberts Welles, on Aug. 12, 1972, in Minden, La.
Pete lived in Florida for most of his adult life, receiving his Navy AOCS training in Pensacola. He lived in Miami and Fort Myers for most of his later career as a commercial airline pilot. Pete worked for more than 30 years as a pilot for Delta Air Lines, ending his career as a Boeing 767 captain flying routes to Europe, South America and India.
His passion was sailing. He enjoyed sailing his Bullseye Silver with the Southwest Harbor Fleet. One of his great thrills was winning the Hayward Cup as crew for his son, Peter Jr., and later with niece Laura Welles.
From age 5, Pete spent all but one of his summers (during the Vietnam War) in Manset. He enjoyed hiking all the trails of Mount Desert Island. He was proud to have reached the summit of Mount Katahdin with his family and to have climbed Mount Rainier with his son. He enjoyed attending St. John’s Episcopal Church in Southwest Harbor — the church where he was confirmed. Pete also was a member of Iona-Hope Episcopal Church in Fort Myers, Fla., where he served on the Vestry and as a member of the Stewardship Committee.
Pete was predeceased by his son, Peter Jr.; siblings Katrina Swanson, Harriet Foresman and Edward R. Welles III and nephew William Swanson.
In addition to his wife of 44 years, Anna, Pete is survived by his daughter, Suzanne Welles Shahnavaz, her husband, Nikrad, and their son, Andrew, of Atlanta. His is also survived by nephews Olof Swanson and Will Welles and nieces Catharine McKibbin, Susan Peterson and Laura Welles.
A funeral service is planned Saturday, July 1, 2017, at 2 p.m. at St. John’s Episcopal Church in Southwest Harbor. Rev. Tim Fleck will officiate. Pete’s ashes will be interred in the Newman Cemetery in Manset.
------------------------
Death notice:  http://www.ellsworthamerican.com/obituary/death-notices-week-june-29/
Peter de Lanoy Welles, 73, of Fort Myers, Fla., and Southwest Harbor, April 29 at Emory University Hospital, Atlanta, Ga., Funeral service 2 p.m. Saturday, July 1, St. John’s Episcopal Church, Southwest Harbor. Interment Newman Cemetery, Manset.