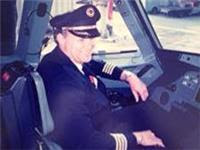 Notification with the passing of retired Northwest Airlines pilot Captain Edwin Metts Stafford Jr., age 76.  He is survived by his wife Jean and their children.  The online obituary and guestbook for Captain Stafford may be accessed at   http://www.legacy.com/obituaries/coastalcourier/obituary.aspx?pid=186220493
Please see obituary below for more information.  Celebration of life services will be held at a later date.
Thank you,
~ Carol for the PCN
Obituary.....
STAFFORD, Jr., Edwin Metts


Edwin Metts Stafford, Jr. passed away peacefully on July 15, 2017. Edwin was born in Ludowici, Georgia on May 2,1941 to Edwin and Madeira Stafford and graduated in 1959 from Bradwell Institute in Hinesville, GA. Achieving his dream of flying, he completed over 300 missions in Vietnam as an Army Caribou pilot and retired as a 747 captain for Northwest Airlines. Edwin served in many roles with the Airline Pilots Association to help improve the airline pilot profession. However, he always looked to his sons as his greatest accomplishment. A great father, pilot and friend the void left by his passing is not easily filled. Edwin is survived by his wife Jean, sons Clay and Jake and their families, and sisters Ila Moody and Twila Sexton. A celebration of his life will be held at a later date. Contributions in the memory of Edwin can be made to: Hospice of the Upstate, 1835 Rogers Road, Anderson, SC 29621 ( hospiceoftheupstate.com) or The Georgia Alabama Land Trust, 226 Old Ladiga Road, Piedmont, AL 36272 ( galandtrust.org).;
Posted by death at 2:48 PM