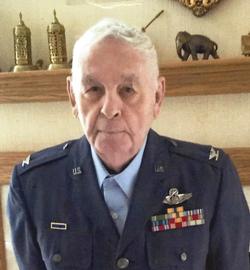 
Age 92, Don passed away peacefully at his home in Prior Lake. Born in St. Paul on April 28, 1925, Don joined the Army Air Corp while still attending Monroe High School, where he had many fond memories acting in school plays, playing hockey with friends, and singing in the school choir. After graduation, Don was sent to Mount Union College and trained as a fighter pilot flying P-51's. After the war, he attended Macalester College and the University of Minnesota, and joined North Central Airlines in 1956 as an airline pilot. He also remained active in the Air Force Reserves, later becoming a full Colonel and Commander of the 934th Tactical Airlift Group. Don would always say he loved flying so much he would have done it for free, and gave his military training credit for his many accomplishments in life. Don married his lovely wife MaryAnn in 1948, was married nearly seventy years, and raised five children in Bloomington. Don retired from Northwest Airlines in 1985. His favorite activities in retirement were ocean fishing, playing tennis, and spending time with his family at his homes in Prior Lake and Key Largo, Florida. He is survived by his wife MaryAnn, his son Thomas (Janet), Robert (Lucy), Janet (Christian) Yoder, Christine (Lloyd) Samuelson, and Joanne (John) Pahl, along with eleven grandchildren and four great-grandchildren. Funeral service will be held Wednesday, July 26, 2017 at Episcopal Church of the Nativity, 15601 Maple Island Road, Burnsville, MN. Visitation starting at 10:00 AM. Interment Fort Snelling National Cemetery. White Funeral Home Lakeville 952-469-2723
Posted by death at 2:28 PM