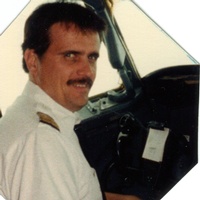 Notification with the passing of retired Delta pilot Captain Harold 'Hal" Turner Carter, age 77.  Captain Carter joined Delta Air Lines 01-03-1966 and was based Atlanta.  He is survived by his wife Terri, their children and grandchildren, plus many other friends and family members.
To view/sign the online guestbook please visit the funeral home website at http://www.colonialfh.net/obits  Captain Carter’s obituary indicates that a memorial service will be held at a later date.
Personal condolences may be sent to the family at
1030 Nantahala Road, Madison, NC 27025-8473.
Thank you,
~ Carol for the PCN
Obituary.............................


Captain Harold "Hal" Turner Carter, 77, of 1030 Nantahala Rd., Madison, NC 27025, passed away, August 19, 2017, at his residence. "I pick the prettiest part of the sky and I melt into the wing, then into the air, till I'm just a soul on a sunbeam." Mr. Carter was born April 28, 1940, in Rockingham County to John and Carrie Turner Carter. He was a U.S. Army Veteran and was a retired captain of Delta Airlines. Hal was a pilot for Richard Childress Racing, loved riding bicycles, visiting Nursing Homes and feeding the homeless. Hal was a member of Baptist Men Missions and was always willing to help those in need. He loved people and enjoyed life. Hal was all about his father God's business and his actions spoke for him. In addition to his parents, he was preceded in death by a son, Tony Carter and a brother, Mac Carter; brother-in-law, Junior Willard. Survivors include his wife, Terri Nixon Carter; sons, Jim Carter, Jesse (Lisa) Bullins and Jamie (Amy) Bullins; daughters, Sherrie Carter and Chasity Carter; eleven grandchildren; brothers, Don (Betty) Carter; sister, Betsy (Victor) Carter; sisters-in-law, Jerri (Tim) Williams, Treva Willard and Katherine Moore; brothers-in-law, Dwayne (Amy) Yates and Steve (Brenda) Yates; special CNA, Janice King. Special thanks to Seth Rogen and his Hilarity for Charity/Alzheimer's Home Instead Foundation. A memorial service will be held at a later date. In lieu of flowers, donations may be made to Hilarity for Charity Alzheimer's Foundation/The Home Instead, Inc., 13323 California Street, Omaha, NE 68154. Colonial Funeral Home Stokes Chapel in Sandy Ridge is serving the family. Online condolences may be offered at www.colonialfh.net