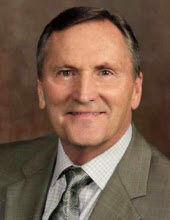 Notification with the passing of retired Western/Delta pilot and mayor Captain David Ted Eyre, age 71.  Captain Eyre joined Western Airlines 09-25-1978 and retired with Delta Air Lines in 2005.  He was elected Mayor of Murray, Utah where he has served in that position since January 2014.  Captain Eyre is survived by his wife Ruth, their children and grandchildren.
To view the online obituary and sign the guestbook please visit
http://www.jenkins-soffe.com/obituaries/Mayor-David-Ted-Eyre?obId=2503366#/obituaryInfo
Services will be held at the Murray South Stake Center, 5735 S. Fashion Blvd., Murray, Utah, on Thursday, August 31st at 11:00 AM. Friends and family may call on Wednesday evening from 6:30-8:30 PM and on Thursday from 9:00-10:15 AM, both at the church. Interment will follow immediately at the Murray City Cemetery.
Personal condolences may be sent to the Eyre family at
5846 S. Kerry Circle, Murray UT 84107-6544.
Thank you,
~ Carol for the PCN
Captain Eyre’s biography.... http://www.murray.utah.gov/113/Mayors-Biography
Obituary......................
Mayor David Ted Eyre, beloved husband, father, brother, son and friend passed away peacefully at his home in Murray, Utah, surrounded by his loving family on August 25, 2017. He was 71 years old. Born August 14, 1946, in Rawlins, Wyoming, to Trulan Orlando Eyre and Louis Catherine Allen Eyre, the youngest of four children.
Ted grew up in Cheyenne, Wyoming, graduating from Cheyenne East High School. He attended Brigham Young University and San Bernardino Valley College, where he received his degree in Aviation Science.
Ted had many passions. His zeal for life was infectious. Two of his greatest passions in life were aviation and people. Both guided him to achieve all of his accomplishments. After enlisting in the U.S. Army, Ted served a tour in Vietnam where he flew a U-21 Ute transport aircraft in the aviation division of the Signal Corps. While attending flight school in Northern California, he met Ruth Peters and fell in love with his sweetheart. Together they built a life of love and support for each other, which would include a 40-year marriage and raising four children.
Ted followed his childhood passion for aviation by becoming an airline pilot for both Western and Delta Airlines. He excelled as a pilot, holding the position of captain for many years before retiring after a 30-year career. Ted's zeal for life continued after the airlines, first by accepting the call to serve as bishop of the Meadows Ward of the Murray Utah South Stake, a calling he loved deeply because of the people he served. His humility and dedication to serving others made him approachable and beloved by his congregation.
On January 7, 2014, Ted was elected by the people of Murray City to become their mayor. Ted's love for the city, its heritage, people and future lead him to become one of its most beloved servants. His impact on the city of Murray both publicly and privately will always be felt. Ted loved all aspects of civic life. His love for the city employees and the Murray residents made him a joy to work with. His humor made him authentic and his dedication to true progress made him an effective leader.
Ted was a story teller. Every day was an experience to be with him. Each day when dropping his children off at school he would always say, "Remember, don't have a good day, have a great day! I love you." Friendships came so easy to Ted; it seems everyone he met immediately become a close friend. He was a father to us all, a hero to his family and will always be missed. The knowledge that he is now with his Father in Heaven and other loved ones reassures us all that we will be together again. We love you, dear father and friend.
Ted is survived by his wife, Ruth; their four children, David (Brandy) Eyre, Shellie Eyre, Amanda (Adam) Faraone and Edward (Rachel) Eyre; five grandchildren, Isabella, Grace, Harper, Maddy and Mckayla; one great grandchild, Kai; brother, Gary (Suellan) Eyre; sisters, Janie (Jack) Romick and Naomi (Doug) Lockheart; and everyone who knew him.
The Eyre family would like to thank the doctors and nursing staff at the Huntsman Cancer Institute and CNS Hospice Care for their unwavering service. In lieu of flowers, please consider a donation to the Huntsman Cancer Foundation.
A funeral service will be held at the Murray South Stake Center, 5735 S. Fashion Blvd., Murray, Utah on Thursday, August 31, 2017 at 11:00 a.m. Friends and family may call on Wednesday evening from 6:30-8:30 p.m. and on Thursday, from 9:00-10:15 a.m., both at the church. Interment will follow immediately at the Murray City Cemetery.
Online condolences may be shared at www.jenkins-soffe.com
.Published in Deseret News from Aug. 27 to Aug. 29, 2017.
news articles...........................
MURRAY, UTAH   - Mayor Ted Eyre died Friday morning from complications of cancer. He was 71.
Eyre, who was elected to a four-year term that began in January 2014, is credited with several improvements to the city during his tenure, according to a statement from Murray administrative services director Tim Tingey.
According to a statement from Deputy Mayor Janet Towers, Eyre oversaw enhancements to Murray Park, the expansion of Fashion Place mall and the University of Utah Midvalley Health Center, as well as the acquisition of the Murray Theater, Murray Chapel and Murray Mansion.
"Mayor Eyre's mark on the city touched so many," Towers said. "He had a deep love and commitment for the city and employees. This love and commitment was displayed in everything he did as mayor."
According to the statement, Eyre was born and raised in Wyoming, attended Brigham Young University and received his degree in aviation sciences from San Bernardino Valley College in California.
He joined the U.S. Army and served a tour in Vietnam. After returning home, Eyre worked on construction projects in Colorado before becoming a flight instructor in California. He eventually became a pilot for Western Airlines, which was acquired by Delta Airlines in 1986.
Eyre and his wife, Ruth, relocated to Murray in 1987, where he retired as a Delta Airlines captain in 2005.
News articles:  http://fox13now.com/2017/08/25/murray-city-mayor-ted-eyre-dies/
http://www.sltrib.com/news/politics/2017/08/25/murray-mayor-ted-eyre-71-dies-after-battling-cancer/


http://www.good4utah.com/news/local-news/murray-mayor-ted-eyre-dies-after-battle-with-cancer/798345892
Posted by death at 2:16 PM