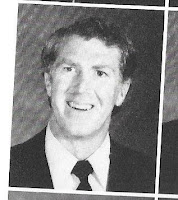 Notification with the passing of retired Western/Delta pilot Captain Lewis Barnum III, age 80.  Captain Barnum joined Western Airlines 04-22-1968 and retired with Delta Air Lines in 1997, as S/O based 030/LAX.  He is survived by his children and their families.
Services for Captain Barnum will be held Saturday, September 2nd at 11:00 AM at Christ Episcopal Church, 1114 Ninth Street in Coronado CA.
If more information is received, we will be sure to pass it along.
Thank you,
~ Carol for the PCN
Obituary.......................
Lewis "Barney" Barnum III -


Lew (Barney) Barnum, a resident of Coronado, California for over five decades, died on August 18th, due to complications from dementia. Born in Woodstown, New Jersey in 1937 he moved to Baton Rouge with parents Lew and Mary Barnum that same year. He graduated from Baton Rouge High School in 1954 and Tulane University in 1958. At Tulane, he was yearbook editor and a Kappa Sigma fraternity member. After graduation, he flew for the US Navy from aircraft carriers in the Pacific until 1968. Subsequently he was a pilot for Delta Airlines, retiring as a Captain in 1997. Active in the community, Lew was a Rotary Club of Coronado member for 44 years once named Rotarian of the year. He served on the Coronado Planning Commission, the board of Bannister House, was a founding member of Coronado SAFE and served as president of the Coronado School Board. He was a long-time member of Christ Episcopal church. Lew is survived by his four children Kirby Barnum, Molly Banta, husband Ted, Beau Barnum and Brooke Barnum, their mother Erin Welch, eight grandchildren, step-daughter Heather and her mother Yvonne, his siblings Dan Barnum, wife Marilyn, Charlie Barnum, wife Dayonne, Mimi Riché, husband Guy and Ann Clemens, husband Gary and 5 nieces and nephews. Services will be held on Saturday, September 2nd at 11:00 am at Christ Episcopal Church, 1114 Ninth Street in Coronado. In lieu of flowers, donations in his memory can be sent to Coronado Rotary Club, Christ Episcopal Church or Christ Church Day School.
Posted by death at 3:24 PM