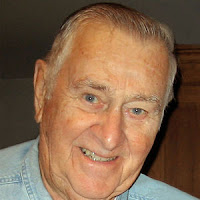 Notification with the passing of retired Northeast/Delta pilot Captain Ralph Raymond Furbush, Jr., age 98.  Captain Furbush joined Northeast Airlines 07-05-1951 and retired with Delta Air Lines in 1979, based Boston.
Widowed with the passing of his wife June, Captain Furbush is survived by his children plus grand- and great grandchildren.
To view/sign the online guestbook please visit http://hosting-6588.tributes.com/obituary/show/Ralph-Raymond-Furbush-106035692
Services are planned for Wednesday, April 25th at Badger Funeral Home located in Littleton, Mass.  Should more information be received we will be sure to pass it along.
Thank you,
~ Carol for the PCN
Obituary.................................Ralph Raymond Furbush, Jr.
Ralph R. Furbush Jr. age 98 of Framingham, passed away peacefully on Saturday, April 21, 2018 at MetroWest Medical Center in Framingham.
Born on June 15,1919 in Framingham, Ralph was the son of the late Ralph R. and Margaret H. (Downes) Furbush. Raised and educated in Framingham. Ralph attended Framingham high school before enlisting in the United States Army in 1940.
Ralph proudly served his country in WWII as an Army Air Force Pilot. While in the service, he was in the invasion of Normandy and many other missions in the European theater. On a mission over Germany, His plane was shot and with engine failure, he was forced to jump from the plane using a parachute and subsequently captured by the Germans and later released. He earned a membership to The Caterpillar Club which is awarded to all flyers who save their lives by using a parachute. Upon his return home and together with his wife June, raised their loving family. He completed his reserve requirements and then pursued a career in commercial aviation as an airline pilot, retiring from Delta airlines. Ralph was a life long member of the Framingham Heart Study beginning in 1948. He was a long time member of the ALPA and the 435th troop carriers.
Ralph was predeceased by his loving wife June and his brother Richard. He is survived by his five children Lynne Bouchard of Leesburg FL, Ralph Furbush III and his wife Norma of The Villages FL, Cheryl Lemon and her husband John of Mendon, MA, Wendy Diotalevi and wife Christine Conran of Upton, MA and Holly Furbush of Framingham, MA. Ralph is also survived by his siblings Dorothy Hernandez of Alexandria, VA and Raymond Furbush of Utah along with many grandchildren and great grandchildren.
Family and friends will gather to honor and remember Ralph on Wednesday, April 25 from 10:00-11:00 am in the Badger Funeral Home, 347 King St., Littleton. His funeral service will follow at 11:00 am. Burial with United States Army Military Honors in South Cemetery, Boxborough.
In lieu of flowers donations in his memory may be made to:
Saint Jude's Children's Research Hospital , 262 Danny Thomas Place , Memphis, TN 38105 ...  www.stjude.org
or