~ IN MEMORY ~
USAF veteran, NWA Capt. Arnie Calvert
November 30, 1934 ~ April 3, 2018
Word has been received with the passing of RNPA member retired Northwest pilot Captain Arnold Conrad Calvert, age 83.  Captain Calvert joined Northwest Airlines 04-04-1959.  He is survived by his wife Linda, his children and grandchildren.
Obituary information is available online at http://www.startribune.com/obituaries/detail/0000251512/?fullname=arnie-calvert
As noted below, memorial services for Captain Calvert will be held May 17th at 10:00 AM, Fort Snelling Chapel, 200 Tower Ave., St Paul MN, with interment at Ft Snelling and a reception to follow.
For those wishing to send a personal note, whitepages lists the family’s Florida address as
5196 Spyglass Ct.,  Oldsmar FL 34677-1931.
Thank you,
~ Carol for the PCN 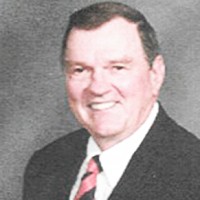 Calvert, Arnie ... Passed away peacefully surrounded by his loving family, April 3, 2018. An Air Force veteran and Reservist with the 96th Troop Carrier Squadron, he was a 36-year Northwest Airlines pilot retiring as a 747-400 Captain. A resident of Oldsmar, FL and St Paul, MN, he enjoyed spending his summers at various athletic fields and dance studios cheering on his four grandchildren. He is survived in death by his beloved wife of 34 years, Linda, his brother Richard (Pat), children Scott (Angela), Kim (Jeff) and Steven (Stephanie); and grandchildren Kyle, Ryan, Katie and Chris. A memorial service will be held May 17, 10:00 AM at the Ft Snelling Chapel, 200 Tower Ave, St Paul with internment at Ft Snelling and a reception to follow. The family would like to thank the staffs at Walker Methodist and The Alton Memory Care for their compassionate care. Memorials preferred to the Lewy Body Dementia Assoc.
Published on April 8, 2018

After a lengthy delay Arnie Calvert finally received clearance to “Fly West” He departed at 6:50 central time this evening. Details will be forthcoming later.