Update/obituary:  Robidoux , Michael Everette Lt. Col. retired from USAF Pilot for Delta Airlines Born 3/21/1970 Died 3/24/2018 Michael was an Eagle Scout in the BSA. Graduated from Muskegon High School then went into navy for four years. Graduated from Southern Illinois University. Then enlisted in US Air Force where he flew ac EC130. He was selected as pilot of the year in 2005 and was awarded a number of medals. He loved his family and his country. He loved spending time out in the woods near Big Rapids. He was a big brother to a young man in Florida. Michael spent his life in service to others. Predecessors sister, Ronda Jane Robidoux. Survived by: wife Lara Baldry Robidoux, Son Corin Michael Robidoux, Daughter Kaela Noel (Miguel) Villanueva, Morher Jane E Robidoux, Father Ronald and Louise Robidoux, Sister Robin J (Nick) Obrenovich and many beloved friends. A celebration of Michael's life will be held Saturday, November 24th, at 1:00 pm at Lakeside Eagles Aerie 3306, 2355 W Sherman Blvd. Muskegon 49441.
Published in Muskegon Chronicle on Nov. 18, 2018 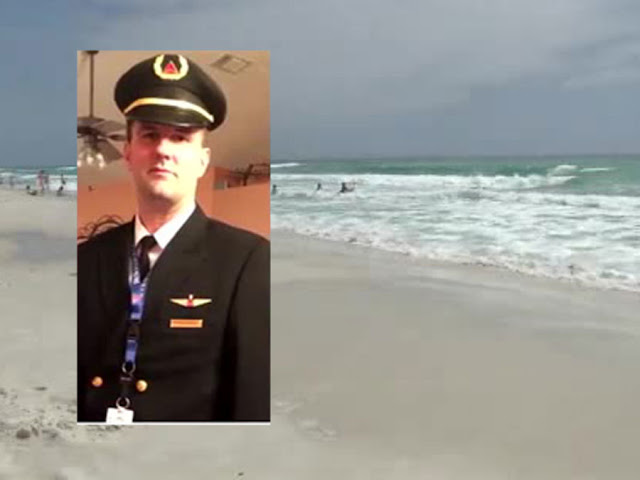 Belated news with the tragic death of USAF veteran Delta pilot Michael Everette Robidoux, age 48.  Michael lost his life when caught in an undertow while attempting to save the lives of two young swimmers who had ventured out too far in rough gulf waters.  Muskegon native, Eagle Scout and retired Air Force pilot, Michael joined Delta Air Lines 09-15-2014, based NYC17B.
Should more information be received we will be sure to pass it along.
Thank you,
~ Carol for the PCN
NAVARRE BEACH, Fla. - When Michael Robidoux saw two kids struggling to swim in the rough surf at Navarre Beach in Florida's Panhandle Saturday, the Air Force veteran and pilot didn't hesitate to jump in after them. But the strong current took Robidoux under and he later died. "He died as he lived -- a hero," Robidoux's cousin, Annette, told Fox News.
Santa Rosa County Sheriff's officials said two surfers rescued children, who have not yet been identified, as a team from the sheriff's office searched for Robidoux. They pulled him to shore and deputies performed CPR. Robidoux was critically injured and airlifted to a local hospital, where he later died.................................
The veteran was also an Eagle Scout and current pilot for Delta Airlines. Close friends and family described him as a "great military hero" and "very respected family man," who was always willing to lend a helping hand.......................................
Links to various news articles relating to incident ....
http://www.wmur.com/article/retired-military-pilot-dies-while-trying-to-save-children-from-drowning/19618255
https://www.pnj.com/story/news/local/pensacola/beaches/2018/03/26/rough-surf-conditions-lead-drowning-rescues-beaches-navarre-alabama/458579002/
https://www.wzzm13.com/article/news/nation/muskegon-native-dies-saving-2-children-from-florida-rip-current/69-533204255
http://weartv.com/news/local/navarre-man-dies-after-trying-to-rescue-swimmers
https://www.abcactionnews.com/news/state/michael-robidoux-retired-military-pilot-drowns-saving-two-children-along-florida-beach


http://www.fox9.com/news/retired-military-pilot-died-a-hero-trying-to-save-kids-from-drowning-at-florida-beach
Posted by death at 12:15 PM