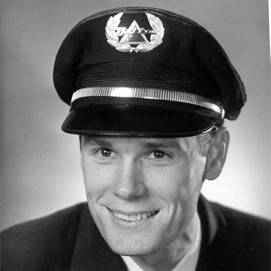 News has reached our group with the passing of retired Delta pilot Captain Charles Francis May, age 84.  Captain May joined Delta Air Lines 12-18-1961 and was based DFW.  Services for Captain May were held today in Allen, Texas.
To view/sign the online guestbook please visit the funeral home website at
https://www.turrentinejacksonmorrow.com/obituaries/charles-francis-may
Should more information be received we will be sure to pass it along.
Thank you,
~ Carol for the PCN
Obituary...................
Charles Francis May of Keller, Texas passed away July 27, 2018 at the age of 84.  He was born March 10, 1934 to Frank Henry May and Leola Vietta (Byers) May in Detroit, Michigan.  Charles grew up in St. Louis, Missouri and Topeka, Kansas. After high school, he declined a minor league contract with the Baltimore Orioles.  He attended Kansas University where he studied theater and was a member of Phi Kappa Sigma.  Charles served his country proudly in the United States Army.  He was a captain for Delta Airlines for 32 years, and authored a book about his career. His hobbies included music, woodworking and fishing.
He is survived by his daughter, Nancy Lindig of Mount Kisco, New York; son, Charles Allen May and wife Mia Alfonso of Las Vegas, Nevada; daughter, Barbara L. Kraemer and husband Ted of Henderson, Nevada; their mother, Lou Ellen May of Mount Kisco, New York; daughter, Caroline C. Jefferys and husband Bart of Keller, Texas; her mother, Rebecca May-Remsen of Atlanta, Georgia; grandchildren, Jason Lindig, Sarah Lindig, Abby Lindig, Kendall Jefferys, Kate Jefferys, Claire Jefferys, Morgan Kraemer, and Macy Kraemer; great-grandchildren, Becca Lindig and Charlie Lindig; siblings, Ron May and wife Gail, Lorraine May and Ed May; and a host of loving family and friends.
Charles was preceded in death by his father, Frank May, mother, Leola Vietta Beasley and sister, Joann May.
A funeral service will be held at 2:00 p.m., Wednesday, August 1, 2018 at Turrentine-Jackson-Morrow Funeral Home in Allen, Texas.  Interment is to immediately follow at Ridgeview Memorial Park in Allen, Texas. The family will receive friends during a visitation on Tuesday evening from 6:00 p.m. to 8:00 p.m. at the funeral home.
--------------------------------------------------------------------
Notice rcvd 8/1/2018 from visitor to our Web site ...........
Deceased full name  Charles Francis May
Date of Birth  03/10/1934
Date of Death  07/27/2018
Relationship  Pilot  Retired  Domicile  DFW
Age at death  84  Cause of death  ?
DAL  Guestbook URL  https://www.turrentinejacksonmorrow.com/obituaries