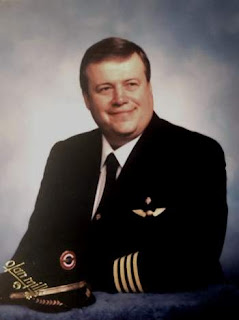 Notification with the passing of retired Northwest pilot Captain Dean Earl Greeno, age 72.  Captain Greeno joined Northwest Airlines  03-24-1969.  He is survived by his wife Mary, his children and grandchildren.
To view Captain Greeno’s obituary online please visit
https://www.havredailynews.com/story/2018/11/20/obituaries/obituary-dean-earl-greeno/521394.html
Service arrangements are not known.  Should more news be received we will be sure to pass it along.
Thank you,
~ Carol for the PCN
Obituary.................Dean Earl Greeno
Dean Earl Greeno was born April 15, 1945, to Walter and Ruth (Kuble) Greeno. He grew up in the small town of Rudyard, Mont., where his family farmed wheat. An avid athlete, Dean played several sports and excelled at basketball, which he played in high school and college.
While attending the University of Montana he discovered his first love — flying airplanes. After graduating with a degree in political science, he pursued his private pilot's license at Harrod's Aviation in Billings, Mont. There he met his first wife, Dona Hicks, who remembers "he had the best smile in the world." In March of 1969, Dean began a long career as a pilot for Northwest Airlines, where he flew domestically and internationally for 35 years. Dean retired as a 747 captain — respected by his colleagues as an exceptional pilot.
While at Northwest, Dean met Mary Oesterreicher, a flight attendant with the airline. They married in 1979 and moved from Minneapolis, Minn., to Spokane, Wash., in 1984. In Spokane, Dean was a fixture at the local racquet club, where he balanced a busy career by playing tennis and racquetball with friends and club competitors. He also loved cars and built a beautiful classic car collection that he displayed in his "shop." Dean and Mary also spent as much time as they could at Priest Lake in northern Idaho, where they shared a cabin with friends and family for the last 30 years. They retired in the Coeur d'Alene, Idaho, area in 2004.
Dean passed away at home on Nov. 12, 2018. He is preceded in death by his parents; infant sister, Marie and brother, Dale. He is survived by his wife, Mary; daughters, Marney (Douglas) Zellers and Mandee (Kurt) Vigesaa; sons, Darren (Leah) Greeno and Mitchell Greeno; as well as six grandchildren.


In lieu of flowers please honor Dean and his wife, Mary, who suffers from late-stage Alzheimer's, by donating to the Alzheimer's Association.
Posted by death at 1:12 PM