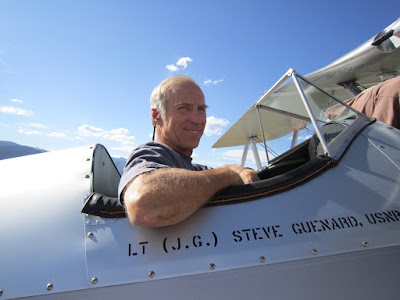 Word has reached our group with the passing of retired Delta pilot Captain Steve Voelker Guenard, age 70.  Captain Guenard joined Delta Air Lines 10-18-1976 and retired in 2003, based 030/SLC..  He is survived by his wife Anne, his sons and his grandchildren.
To view Captain Guenard’s obituary online and to share memories, please visit
https://www.legacy.com/obituaries/name/steve-guenard-obituary?pid=191074360  or
https://www.legacy.com/obituaries/thenewsstar/obituary.aspx?n=stephen-voelker-guenard&pid=191073592
Please see obituary information and below for services:
Funeral Mass, January 12th at 3:00 PM, St. Patrick Church in Lake Providence, LA.
Should more information be received we will be sure to pass it along.
Thank you,
~ Carol for the PCN
Obituary...................Steve Voelker Guenard
Steve Guenard took his final flight on December 23, 2018.  He passed away peacefully at his family home, Arlington, in Lake Providence, LA.  Steve was born in Vicksburg, MS to Stephen and Flournoy Guenard on April 4, 1948. He graduated from the United States Air Force Academy in 1970 and served as an F-106 pilot in the Air Force from 1970-1975. In 1976 he was hired by Delta Air Lines. He flew for Delta for 27 years before retiring from the Salt Lake City base in 2003.
Steve is survived by his wife of 43 years, Anne of Park City, UT, sons, Zack (Kristin) of Park City, John (Jennifer) of Metairie, LA, and grandchildren, Imbrie and Wesley of Park City.
Steve lived a life filled with love of family, community, and aviation. He was dedicated to preserving World War II aircraft and to keeping them flying. He co-founded the Heber Aero Museum and was a member of the Commemorative Air Force.  For most people, the sky is the limit. For Steve, the sky was his home.
A funeral mass will be held January 12 at 3:00pm at St. Patrick Church in Lake Providence.
Memorial donations may be sent to:
Commemorative Air Force, Utah Wing
PO Box 507
Heber City, UT