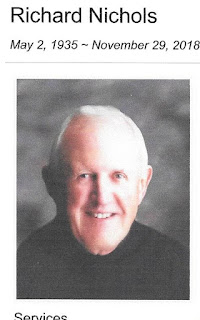 Word has reached our group with the passing of retired Delta pilot Captain Richard Nichols, age 83.  Captain Nichols joined Delta Air Lines 08-27-1962 and retired May of 1988, based DFW.  He is survived by his wife Diane, their children and grandchildren plus many other dear friends and extended family members.
Captain Nichols’ obituary may be viewed online at
https://www.frenchfunerals.com/notices/Richard-Nichols
A CELEBRATION OF LIFE service and reception is planned for Saturday, January 26, 2019  at 11:00 AM
FRENCH funeral home, 7121 Wyoming Blvd. NE , Albuquerque, NM 87109.
For those wishing to send a personal note, family members may be contacted at nichols535@gmail.com
Thank you,
~ Carol for the PCN
https://www.frenchfunerals.com/notices/Richard-Nichols
Richard Nichols.........MAY 2, 1935 ~ NOVEMBER 29, 2018 (AGE 83)
Richard Nichols was welcomed into the kingdom of heaven on November 29, 2018. He was a beloved husband, father, grandfather, and friend. In Richard’s final days he did not complain but spoke of his thankfulness to God for the blessing and adventure filled life he was given.
Richard was born May 2, 1935 in Madison, Wisconsin. He graduated from Madison West High School. While attending the University of Wisconsin he was accepted into the United States Air Force Aviation Cadet Training program where he began a life long love affair with aviation. He was commissioned a 2nd lieutenant and received his wings in July of 1958. He then flew the F-89 in the Wisconsin Air National Guard and the F-102 in the Texas Air National Guard. Of the twenty-three aircraft that Richard went on to fly he considered each of them an adventure. Richard initially flew the DC-6 for Delta Airlines where he was hired in 1961. He culminated his 25-year career as a captain of the Boeing 767.
In his retirement he served on the Taos, New Mexico Airport Board for three terms. Through the EAA and Blue Sky foundation he enabled many young people to experience aviation at its best in Oshkosh, Wisconsin. Richard also built his own Rans S-6S “Coyote” plane which he flew out of the Taos and Double Eagle Airports.
Richard met his one true love Diane McCall, on a blind date. He proceeded to court her by buzzing her dorm at Texas Women’s University in an F-86. Diane was sufficiently wooed and they married in 1960.
Richard greatly enjoyed being a husband, father, grandfather, and brother. He taught his children to embrace life and be thankful for the blessings within it. He is survived by his wife Diane and their children:
Daughter Wendy and husband Bruno Biasetto, Daughter Leslie and husband Mark Davidian,
Daughter Kimberly Nichols and fiancé John Curto, Son Matthew and wife Vanesa Nichols
The grandchildren include:  Alessandro, Gemma, and Guliana Biasetto...Mikaela, Lauren, and Claire Davidian...Trevor, Abigail, and Emily Perkins...Mackenzie, Quentin, and Olivia Nichols.
Richard is also survived by his brother and sister in-law David and Karen Nichols and sister in-law Dennie Nichols.
Loved ones that preceded Richard in death are his parents Walton and Geraldine Nichols and his two older brothers Walton and Robert Nichols.
A Celebration of Life service and reception will be held Saturday, January 26, 2019 at 11:00 a.m. at FRENCH - Wyoming, 7121 Wyoming Blvd. NE, Albuquerque, NM.
If you would like to make a donation in Richard’s name, please give to the charity that is dearest to your heart.
Richard’s favorite poem by World War II pilot, John Gillespie Magee, Jr.:
High Flight
Oh, I have slipped the surly bonds of earth,
And danced the skies on laughter-silvered wings;
Sunward I’ve climbed and joined the tumbling mirth
Of sun-split clouds — and done a hundred things
You have not dreamed of — wheeled and soared and swung
High in the sunlit silence. Hov’ring there
I’ve chased the shouting wind along and flung
My eager craft through footless halls of air.
Up, up the long delirious burning blue
I’ve topped the wind-swept heights with easy grace,
Where never lark, or even eagle, flew;
And, while with silent, lifting mind I’ve trod
The high untrespassed sanctity of space,
Put out my hand, and touched the face of God.
Posted by death at 9:15 PM