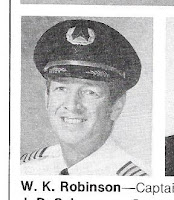 Word has reached our group with the passing of Delta Captain Wilfred K. ‘Bill’ Robinson, age 82.  Captain Robinson joined Delta Air Lines 11-19-1962 and retired in 1996, based Chicago then 030/ATL at time of retirement.  Widowed in September 2014 with the passing of his wife Jean Ann, Captain Robinson is survived by their children, their grandchildren and many other extended family members.
To view the obituary online please visit this news site:  :
http://www.wcsjnews.com/obituaries/wilfred-k-bill-robinson-of-morris/article_1b40d6ec-764d-540e-a4c9-0ee30c54d24a.html
Memories may be shared at the funeral home website: www.frulandfuneralhome.com
Visitation will be held January 11th at Fruland Funeral Home in Morris Illinois.  A Celebration of Life will be held January 12th at the Morris Country Club in Morris.  Please see all available information below.
Thank you,
~ Carol for the PCN
Obituary............................
Wilfred K. “Bill” Robinson of rural Morris passed away January 2nd, 2019.

Born on March 19, 1936 in Shenandoah, Iowa, Bill moved with his family to their farm near Mazon, Illinois.  He was educated in Mazon schools and obtained his pilot’s license while still in high school.  Throughout his life, aside from his family, flying was his greatest joy.  He graduated from the University of Illinois and worked as a flight instructor at the University of Illinois Flight School in Urbana, Illinois.
In January of 1957, Bill married Jean Ann Holderman of rural Morris, and together raised 3 children of their farm in Morris.
Bill and his family moved to Morris in 1963 after accepting a position as an airline pilot based at Chicago’s O’Hare Airport.  After 33 years as a pilot, Bill retired as a Captain for Delta Airlines in 1996.  When not flying, Bill was busy farming with his family.
After retirement, Bill continued to farm, enjoyed traveling, and pursued many interests, including hunting, skiing, and photography.  Bill was always willing to play his ever-present harmonica for all to enjoy.
He was preceded in death by his wife of 57 years; Jean Ann (Holderman) Robinson, his parents; Donald F. Robinson and Dorothy (Coe) Robinson, Brother-In-law Gerald Lanier.
Surviving to cherish his memory are his 3 children; Alissa (Michael) McCormick, Fred (Benita) Robinson, and David Robinson, three grandchildren; Hayley (Ryan) Wendling, Eric Robinson, and Hadley McCormick, one sister Sue (Bill) Andrews, and many nieces, nephews and friends.
The family of Bill Robinson would like to express gratitude to the staff of Park Pointe Healthcare and Rehabilitation Center and Joliet Area Hospice for their caring support during Bill’s time there.
Visitation will be held on Friday, January 11th from 4pm-7pm at the Fruland Funeral Home in Morris Illinois.  A Celebration of Life will be held on January 12th from 11am-3pm at the Morris Country Club in Morris.  Burial will be held in a private family ceremony at a later date.  Preferred memorials may be made as a gift in Bill’s memory to ICARE International (880 Bedford Road, Morris, IL), Joliet Area Hospice (250 Water Stone Circle, Joliet, IL), or to donor’s choice.
For more information call the funeral home at 815-942-0700 or sign the private online guestbook at www.frulandfuneralhome.com
-------------------------------
Wife Jean Ann’s obituary in part...............Jean Ann Robinson, 77, of Morris, passed away Saturday, Sept. 27, 2014 at Rosewood Care Center in Joliet with her loving family by her side.  Jean was born Oct. 19, 1936 in Morris, the daughter of James F. and Ruth(Wills)Holderman. She received her education in the schools of Pine Bluff, Coal City and graduated from Morris Community High School with the class of 1954. Later she received her bachelors degree from the University of Illinois in Champaign and her masters degree from the University of Wisconsin in Madison. She married Wilfred "Bill" Robinson on Jan. 24, 1957 at the First Presbyterian Church in Morris...................
-----------------------------
Sent: Friday, January 04, 2019 2:23 PM   To: death.flwnwst@gmail.com
A visitor to our Web site has advised us with the passing of
Wilfred K. "Bill" Robinson ,  Date of Birth  03/19/1936 ,  Date of Death  01/02/2019
Age at death  82 ,  Airline  DAL