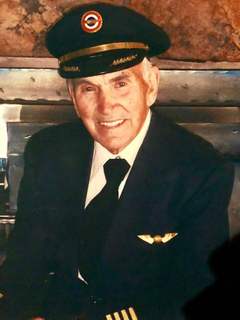 Notification with the passing of retired Northwest pilot Captain Louis Henry Marchuk, age 88.  Captain Marchuk joined Northwest Airlines 04-06-1959.  Widowed in 2012 with the passing of his wife Iris, Captain Marchuk is survived by his children plus grand- and great grandchildren.
To view the obituary online and share memories please visit
http://www.whitesittfuneralhome.com/obits/obituary.php?id=710507
A brief obituary notice is also available online at
http://www.tributes.com/obituary/show/Louis-Marchuk-106710673
Thank you,
~ Carol for the PCN
Obituary notices for Louis H. Marchuk of Victor, Montana.
Louis was born on August 17, 1930 and passed away on Wednesday, December 26, 2018.
Louis was a resident of Victor, Montana at the time of passing.
He served in the U.S. Army's Signal Corps in their early years; Louis spent his career in the airline industry, successfully retiring after 33 years with Northwest Airlines (now Delta) as a Captain................................
Victor - Louis Henry Marchuk, age 88, of Victor, Montana, died December 26, 2018, at St. Patrick’s Hospital, Missoula, from cancer. He was born August 17, 1930, Baudette, Minnesota, to Nick and Grace Marchuk. Louis married his high school sweetheart, Iris Koidahl, in 1950, and they were married 62 years until her death in Victor in 2012. He served in the U.S. Army’s Signal Corps in their early years; Louis spent his career in the airline industry, successfully retiring after 33 years with Northwest Airlines (now Delta) as a Captain. During his career, he flew all over the U.S., as well Europe, the Caribbean and Pacific islands. They lived in various states from New York to California, eventually moving back to Minnesota and then to Montana in December 1975 to begin ranching in the Bitterroot Valley with their son, Keith. They raised Hereford cross cattle and Appaloosa horses, grew and harvested their own hay. Louis loved to fly, horseback ride, raise quality cattle, and hunt mountain lions, elk and antelope. When living in Minnesota, he hunted pheasants, ducks and whitetail deer. He was interested in astronomy, studied the habits of wild animals and migrating birds, and educated himself on many different topics. He was a private man who prided himself on a job well done, and he passionately loved his wife and their ranch’s panoramic view of the spectacular Bitterroot Mountains. Louis is survived by his daughters, Lynda (Bob) Zimmerman, Pamela (Scott) Olson, both of Minnesota, and son, Keith (and Hilda) Marchuk, Stevensville, his sister Elouise McKinnon, Minnesota, as well as seven grandchildren and numerous great-grandchildren. He was preceded in death by his wife, Iris C. Marchuk, brother Vernon “Bob” Marchuk, and sisters, Marie (Hanlon) Olson, Lenore (Vern) Olson, and his parents. The family wishes to thank the staff at Stevensville Senior Center for their friendship, thoughtfulness and generosity through Louis’ recent illness, as well as his friend, Margo Sims, Victor, for her care. A private interment will be held Tuesday, January 8, at Riverside Cemetery, Stevensville.
-------------------------
Wife Iris....obituary link:  http://www.whitesittfuneralhome.com/obits/obituary.php?id=410110
Iris Charlene Marchuk     Died: Fri., Oct. 12, 2012
Iris Charlene Marchuk, 81, of Stevensville, passed away Friday, Oct. 12, 2012, at her home. She was born Dec. 6, 1930, in Eveleth, Minn., the daughter of Helmer and Ida Koidahl.  Iris attended first through eighth grade at the Boone Country School. She then graduated from high school in Baudette, Minn., in 1948. On Aug. 19, 1950, Iris was united in marriage to Louis Marchuk. They were married for 62 years and lived in various cities around the country due to Louis' career. Iris was employed at Revlon Inc. in New York City. In 1975, they settled on a large cattle ranch in the Stevensville area...............