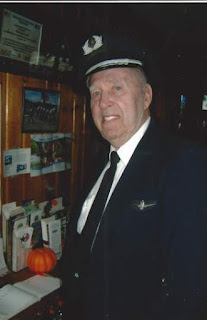 Notification with the passing of former Northwest pilot Captain Don E. ‘Pete’ Clark.  Captain Clark was with Northwest Airlines circa 04-27-1953 to 01-25-1957.
Captain Clark’s obituary may be viewed online at
https://www.buffalohillfh.com/notices/Don-Clark
Memorial services are planned for January 26th at the VFW Hall in Bigfork MT.....please see obituary information below.
Thank you,
~ Carol for the PCN
Obituary...................Don E. 'Pete' Clark, 91
Bigfork Eagle (MT) - Thursday, January 24, 2019
Captain Don E. "Pete" Clark passed away in his sleep on Jan. 14, 2019.
Don wanted to fly since his first airplane ride and lesson in a Piper Cub while in Great Falls before he turned 21. He washed the aircraft to earn his first ride and after that was only out of the air to sleep and be with his family until mandatory retirement at age 60.
He graduated from the University of San Francisco and attained the position of chief check pilot, retiring from American Airlines in 1988 after many years flying with Air Cal based out of Orange County (John Wayne) Airport, also TWA, Air America, Capital and Northwest Airlines.
A dedicated husband and father of three, he then turned his attention from his grown family to breeding and training Arabian horses for track and show, which won many awards in the U.S. and Canada for speed and conformation.
Don was the last of the Clark children born to Don Richard and Nellie Amanda Clark, being born in Yellow Bay in the cabin (bad blizzard in 1928) on the lower 60 of the Clark Homestead. His heart was never far from the Flathead Valley, spending summers in his home on the Beardance Homestead, which he built from the ground up.
He was proud to serve his country, having joined the (Army Transportation Corps) Merchant Marines in 1944 at the age of 16 after his brother Dick was shot down in a B-24 over France.
He was preceded in death by his lovely bride Leona, and brothers Fredrich, Richard B. and Verne F. Clark, and sisters Effie (Dockstader), Margaret (Ratchford) and Wanda Fae (Baillie).
He is survived by his sons Randy and Rick, and daughter Cherie (Miller). Uncle Pete was known to his nieces and nephews to be kind and generous and always ready with a story, having traveled many times around the world as a pilot or his second love as an Arabian horse breeder, trainer and judge. Family and friends bid him a warm goodbye as he rides off into the sunset on his beloved Khashm to be with his heavenly family. We will miss you Dad.