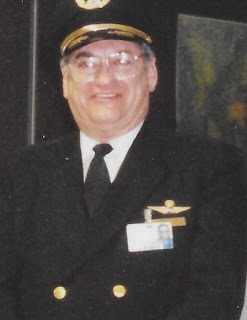 Mr. Jerry Luther Hall, age 78, of Covington, GA passed away Sunday, January 20, 2019.  He was born August 5, 1940 in Floyd County, Kentucky to John Graham Hall and Hester Hall, who have preceded him in death.  Mr. Hall was a retired Delta Airlines pilot after a 30-year career.  Mr. Hall will be remembered for his love of both flying and the Kentucky Wildcats, and for his generosity of spirit.
Mr. Hall is survived by his daughter, Deborah Dawn (Brant) Gardner, his son, Dr. John David Hall, his three grandsons, Graham Hall (Alyse) Gardner, Griffin Owen (Madison) Gardner, and Grayson Hunt Gardner, and his sister, Rosa Mary Hall. Mr. Hall was also preceded in death by his brother, David Morgan Hall and his sister, Elizabeth Caroline Hamilton.


A gathering of friends and family will be held Saturday, February 2, 2019 from 4:00 PM to 6:00 PM at J.C. Harwell and Son Funeral Home in Covington, GA.  There will also be a visitation and funeral service held in Kentucky at Hall Funeral Home in Martin, Kentucky on February 8, 2019.  J.C. Harwell and Son Funeral Home, 2157 East Street, SE, Covington, GA 30014 is in charge of the arrangements.  A guest book may be signed on-line at www.harwellfuneralhome.com

~ IN MEMORY ~
DL Capt. Jerry Luther Hall
AUGUST 5, 1940 ~ JANUARY 20, 2019
Word has reached our group with the passing of retired Delta pilot Captain Jerry Luther Hall, age 78.  Captain Hall joined Delta Air Lines 02-08-1965 and was based ATL/031.
Captain Hall’s son John writes:  “Hello, this is Jerry's son, John Hall. I have the unfortunate responsibility of telling everyone that my Father passed away this past Sunday, 1/20/19, due to what appears to be a sudden heart attack. Fortunately it appears that he did not suffer at all. A viewing and a gathering of friends and family will be held on 2/2/19 from 4-6pm at JC Harwell and Son Funeral Home in Covington GA for his friends and family in the Atlanta/Conyers/Covington area. A week later, a viewing will be held from 5-7pm with a service from 7-8pm on 2/8/19 at Hall Funeral Home in Martin KY for his friends and family in the KY area. His burial will be on Saturday 2/9/19 at Davidson Memorial Garden Cemetery at 11am. For those attending the burial, we will be leaving from at the funeral home at 10:30am. Again, I hate being the bearer of bad news for all those who knew and loved my father. Thanks and I wish all peace, John”
Memories may be shared online at the funeral home website
https://www.harwellfuneralhome.com/notices/Jerry-Hall
J. C. Harwell & Son Funeral Home of Covington, GA has been entrusted with arrangements...(770) 786-2524
Email: harwellfuneralhome@gmail.com
To the best of my knowledge per whitepages listing, personal condolences may be sent to the Hall family at
5109 Libby Cv SE , Covington GA 30014-3184.
Thank you,
~ Carol for the PCN
notice to our website rcvd Thursday, January 24, 2019 .....
Deceased full name  Jerry Luther Hall
Date of Birth  8/5/1940
Date of Death  1/20/2019
Relationship  Pilot  Retired