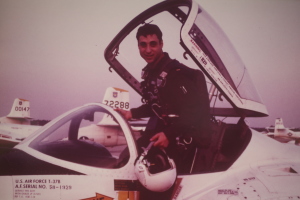 Our group has just received notification with the passing of Delta pilot Captain Joel Aaron Horwitz, age 63.  Captain Horwitz joined Delta Air Lines 09-22-1988 and was based ATL.  He is survived by his wife Michele McClure Horwitz, their children plus many other family members and aviation colleagues.
To view Captain Horwitz’s obituary online and share memories please visit
https://www.byrdandflanigan.com/notices/JoelAaron-Horwitz
Arrangements were entrusted to Byrd & Flanigan Crematory & Funeral Service of Lawrenceville GA. (770) 962-2200.
Thank you,
~ Carol for the PCN
Obituary...............................
Joel “Joe” Aaron Horwitz, age 63 of Loganville, GA; passed away on Wednesday, November 14th, 2018.   He is survived by his wife, Michele McClure Horwitz, and their children Joel, Mia, Skyla and Eli, and by children Jessica Lily Jenkins married to Daniel Jenkins and granddaughter Camille, and Vicki Horwitz married to Daniel Booth, sisters Ellen Darr married to the late David Darr and niece Melanie Bachrach married to David Bachrach and nephew Jonathan Darr married to Nyana Singh Darr, and Barbara Grad Allen married to Peter Allen and nephew Sam Allen. He was the son of the late Ruth and Rubin Horwitz of Chicago, IL.
Joe was a Captain at Delta Air Lines, where he worked from 1988 - 2018.  He flew on the 727, DC-9, MD-88, 757 and 767-ER, and was Captain on the MD-88, 757 and 767-ER.   He served in the United States Air Force for 8 years.  While in the Air Force, he was an aircraft commander of the nation’s primary strategic bomber, the B-52G, where he supervised a combat crew of five experts tasked with worldwide, all-weather, nuclear/ conventional strike missions critical to national security.  He was responsible for maintaining the highest state of readiness by planning and executing aerial refueling, low altitude tactics, and nuclear/ conventional weapons delivery and defensive actions. Graduating first in his class, he was a distinguished graduate in Officer’s school and was honorably discharged as a Captain in 1988. He held Master of Mechanical Engineering and Bachelor of Science degrees from the University of Illinois at Urbana–Champaign.  Upon graduating, he was invited to Berkeley to read his thesis on Thermodynamics. He held several mechanical engineering patents.
A skilled craftsperson, he was excellent in woodworking and built a gazebo in his backyard, a series of precise WWII plane replicas and beautiful pine furniture.  Always on the go, his love for flight extended to motorcycles and to travel with his family over the years. His interest in engineering never stopped and he worked on his cars throughout his life.  As an adult, he loved to play the guitar, and as a child he played the trumpet.
He was an avid athlete who liked being outdoors and loved running and hiking, and he shared his love for the outdoors with his children.  Growing up, he played ice hockey in Chicago outdoors at Terminal Park in his neighborhood and with the Niles North High School team indoors, and continued to play on local teams as an adult.
Joe had wry sense of humor and he liked to have fun - he liked travel and adventure, adrenaline rushes and fighter jets.  He was engaged in life and lived life to the fullest. He was taken from us too soon.
A Celebration of Life service for Joe will be at the Georgia National Cemetery at 5580 Knox Bridge Hwy., Canton, GA 30114 on Tuesday, November 20th at 1:30 pm. Condolences can be sent to the service, or made through the funeral home, Byrd and Flanigan in Lawrenceville, GA, website at https://www.byrdandflanigan.com/notices/JoelAaron-Horwitz. Arrangements by Byrd & Flanigan Crematory And Funeral Service Lawrenceville GA. (770)962-2200 ByrdandFlanigan.com
-----------------------------------------------------
Wednesday, January 23, 2019 6:26 PM
To: death.flwnwst@gmail.com   ..... visitor to our Website has filled out this form ...............
Deceased full name  Joel Aaron Horwitz
Date of Birth  24Jan55    Date of Death  14Nov18
Pilot  Active  ATL
Age at death  63
Living Spouse  Michelle McClure Ho
Address  Loganville  GA
Airline  DAL
Guestbook URL   https://www.byrdandflanigan.com/notices/JoelAaron-Horwitz