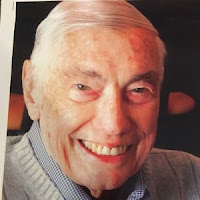 News has reached our group with the passing of retired Northeast/Delta pilot Captain Frank Keefe, age 90.  Captain Keefe joined Northeast Airlines 06-11-1953 and retired with Delta Air Lines, based Boston.  Widowed in December 2008 with the passing of his wife Joan, Captain Keefe is survived by their children, their grandchildren and a great granddaughter, plus many other family members and close friends.
To view the obituary online and share memories, please visit the funeral home site at
https://lambertfuneralhome.tributes.com/obituary/show/Frank-E.-Keefe-106751941
Calling hours are Jan. 22nd from 4-7 PM,  Lambert Funeral Home in Manchester NH.
Mass of Christian Burial will be celebrated Jan. 23rd at St. Catherine of Siena Church, Manchester NH.
Thank you,
~ Carol for the PCN
Obituary ................  Francis E. "Frank" Keefe of Manchester died peacefully at home on January 16, 2019 after a period of failing health.
Born in Manchester on May 25, 1928, he was the son of Frank and Anna (Norris) Keefe. He was predeceased by his brother, John Vincent Keefe. He was a lifelong resident of Manchester.
He attended Bakersville School, class of 1942, and graduated from Manchester Central High School in 1946. He served in the U.S. Navy from 1946 to 1948 aboard the USS Valley Forge (CV 45) on which he traveled around the world.
From 1950 to 1953 he attended flight schools in New Hampshire, Vermont and New York. He became a pilot for Northeast Airlines in 1953. From 1953 to 1988 he flew for both Northeast Airlines and Delta Airlines flying both domestic and European routes. 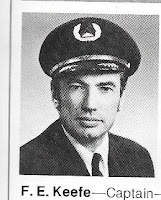 Captain Keefe joined Northeast on 06/11/1953 and retired in November 1984.
Frank married Joan Mendzela of Manchester on April 24, 1954. They spent 54 years together until her passing in 2008.
During his life he maintained a close relationship with his classmates from grammar school and high school.
Beginning in 1980, he made his annual trip to Ireland and had many friends in the area of Millstreet Town, County Cork, where his grandparents had lived. He managed to go to the Knock Shrine in County Mayo on every visit. His favorite location of all was Slea Head in Dingle, County Kerry. He had many wonderful memories of his travels through Ireland.
He followed Trinity High School basketball in his later years where his son David coached and his grandson Patrick played. He enjoyed trips to Foxwoods with the guys and looked forward to a slice of key lime pie at his favorite restaurant at the casino where he also had the opportunity to see a performance by his favorite singer, Diana Krall.
Frank was a member and supporter of the Irish American Partnership, the NH Aviation Historical Society and the Manchester Historic Association. He attended St. Catherine of Siena Parish throughout his adult life.
Although his work took him far away, his family always came first. They meant the world to him.
Family members include five children, Lt. Col. Daniel Keefe, USAF (retired) of Oklahoma City, OK, Donna Shannon and her husband, David, of Barrington, Marcia Keefe and her husband, Glenn Charette, of Saco, ME, David Keefe and his wife, Donna, of Manchester and Paul Keefe of Weymouth, MA. His grandchildren, who held a special place in his heart, include Timothy Shannon of Manchester, Megan Shannon, Esq. of Philadelphia, PA, Ryan Mesick of Milford, Kevin Mesick of Saco, ME, Erin Keefe of Denver, CO, Patrick Keefe of Manchester and Emily Keefe and Molly Keefe both of Somerville, MA; a great granddaughter, Kaylee Mesick of Milford; his nephews and nieces from the west coast; his cousins; and his special group of friends from the Elliot at River's Edge exercise group.
The family wishes to thank the VNA of Manchester and hospice nurse Nancy for their support and extraordinary care.
SERVICES: Calling hours are Tuesday (Jan. 22) from 4 to 7 p.m. at Lambert Funeral Home & Crematory, 1799 Elm St., corner of North Street, Manchester. A Mass of Christian Burial will be celebrated Wednesday (Jan. 23) at 10 a.m. at St. Catherine of Siena Church, 267 Webster St., Manchester. Committal prayers will follow at St. Joseph Cemetery, 488 Donald St., Bedford.
To leave a message of condolence, visit www.lambertfuneralhome.com
Lambert Funeral Home , 1799 Elm St., Manchester, NH 03104 .... 603-625-6951