Captain Raymond L. Dahl passed away January 11, 2019 in Chelsea, Michigan from Glioblastoma, an aggressive brain tumor. Ray was born 11-23-41 in Madison, Wisconsin. He began his career with the airlines 2-22-62, retiring 11-23-2001 from Northwest Airlines. Ray made a tremendous impact on many peoples lives, not only through the airlines, but also in his personal life. Ray is survived by his wife Dianne, his children Martha, Greg, Julie and step daughter, Shelley, 15 grandchildren and 5 great grandchildren. Ray's wishes are to have no funeral or memorial services. There will be a luncheon to celebrate his life on March 23rd at 1:00 p.m. at Trinity Lutheran Church, 1400 W. Stadium Blvd., Ann Arbor, Michigan 48103. If you wish to attend we would love to have all of you and share your memories and stories about Ray. If you cannot attend and wish to submit stories or videos, please send to Dianne at ded1842@comcast.net  Contributions may be made to the American Cancer Society of Ann Arbor Hospice. 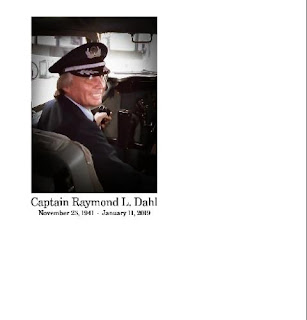 News has reached our group with the passing of retired West Coast/Hughes Airwest/Northwest pilot Captain Ray Dahl, age 77.  Rosters indicate that Ray joined West Coast Airlines 10-02-1967, and made the various mergers with Hughes AirWest and Northwest Airlines.  *Captain Dahl is survived by his wife Diane, his son and stepchildren, grandchildren plus many aviation colleagues and airline friends.
Online condolences and memories may be shared at:
https://www.dignitymemorial.com/obituaries/ann-arbor-mi/raymond-dahl-8123030
Captain Dahl was diagnosed last November with Glioblastoma, and had suffered a fall.....medical complications led to his passing the evening of January 11th.  As was Ray’s wishes, no services are planned.
For those wishing to contact the Dahl family, you can reach Diane at her email address ded1842@comcast.net
Always supportive, Ray will be missed by us all.
Thank you,
~ Carol for the PCN


NO SERVICES ARE SCHEDULED AT THIS TIME. RECEIVE A NOTIFICATION WHEN SERVICES ARE UPDATED.
Posted by death at 5:13 PM