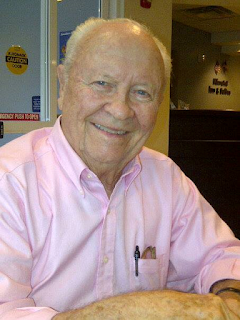 So much can be written.....but the bottom line is that we will miss our friend Captain Ross.  At the age of 96, Delta Golden Wings member retired Delta pilot Captain George Randolph Ross was a walking history book of life experiences.   Born/raised in Ensley AL, USN ret in 1964, Captain Ross joined Delta Air Lines 08-21-1951 and retired with Delta 12-01-1982, based ATL.   He was widowed in 2009 with the passing of his beloved wife Mary (obituary below).  Captain Ross is survived by their children and grandchildren plus many other family members.  Along the line he acquired us.... his many friends, aviation colleagues, and email buddies.  The best we can each do is remember Captain Ross in our own special way and pass along a good deed in his memory.
Please click on at our memorial site  ..... leave a story and share your memories.
Thank you,
~ Carol for the PCN
-------------------------------------------
From: Buck Stevens Sent: Tuesday, February 11, 2019   Subject: Death of Delta Captain George Ross - age 96
I received an email from a close friend of George’s advising me that George died suddenly around 5:45am this past Friday, February 8th from a heart attack. He will be buried next to his wife Mary at The Georgia National Cemetery in Canton, GA. 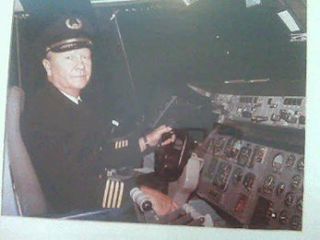 I had the pleasure of flying with George on the CV-880 and DC-8 in 1970 and early 1971. George was not only a gifted pilot, but a thoroughly professional one as well. Always the consummate southern gentlemen -  both the Flight Attendants and guys who flew with him loved and admired him. 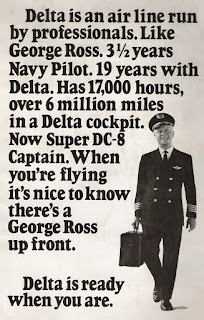 He lived in Dunwoody and when he retired he gave me some brand new white uniform shirts he had purchased but never worn. After retirement from Delta he never looked back, and went to work full-time in a print shop in the little Dunwoody mall near the Post Office and loved what he did since he had done some of that before the Navy and joining Delta. He certainly didn’t need to work since he was receiving both a Navy and Delta pension (back when there was no lump sum). He told me it kept his mind busy and he used all the money for some great vacations with his wife who he fondly called Queen Mary.
George always maintained that love for flying and had several model Delta aircraft and pictures as well in his assisted living home in Birmingham. He had a full page ad from the AJC framed showing him in his uniform carrying his flight bag along with some great narrative stating how professional he was, how many Delta aircraft he had flown and how many total flight hours, etc. It was a great ad for Delta and they ran it quite often in the seventies saying basically come fly with us and all the professionals at Delta like George.
George was an email buddy to a host of retired pilots and his mind was extremely sharp along with his always present clever wit.
As soon as I have more details about his service, etc. I will let you know.
-- Bucky Stevens
Feb. 13 update:  just received the latest update from a very close friend of George. ......................
There will be no service in Birmingham. George's son, Bob, left this afternoon going to Atlanta to leave his dad's ashes
in Duluth, GA at the Head Funeral Home. There they will be sent to Canton, GA (National Military Cemetery). This was all planned by George. There is no obit.  Bob mentioned that any service there would be at some future time.
------------------------------ 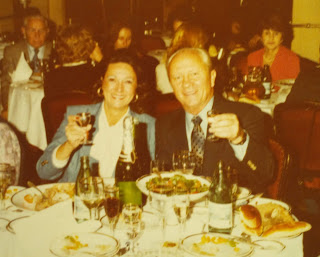 wife Mary’s obituary........ROSS, MARY "MIMIA" MAHALAS STRITIKUS
Mary "Mimia" Mahalas Stritikus Ross, 85, passed away September 18, 2009. She was born in Wylam, AL, on October 28, 1923, to Condilo and Gerasimo Mahalas, and was one of six children. Mary was married to Steve Stritikus of Ensley, AL, until his passing in 1958, and, since 1974, has been a devoted wife to George R. Ross of Alpharetta, GA.
Mary managed the Lane Bryant Shop in Birmingham, and retired after 2 decades as a Special Agent with the Prudential Insurance Company in Atlanta. She was a member of the Philoptochos women's organization of the Greek Orthodox Church.
Mary is survived by numerous loving family members and friends, including husband, George, daughter, Carol, son, Bob, and grandchildren, Jesse, Greg, Lauren, and Robbie. A gathering in her honor will be held at a later date.
In lieu of flowers, as a tribute to Mary's ever generous and nurturing spirit, donations can be made in her name to the Foster Children's Foundation, P.O. Box 2469, Duluth, GA 30096, or AceraCare Hospice of Atlanta (770-698-8785) or your local hospice.
Sweet Mary ~ Mom ~ Mimia