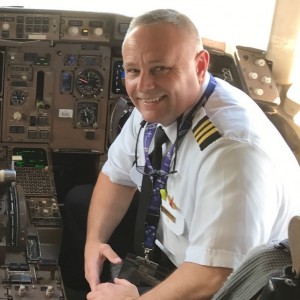 Notification with the passing of Delta pilot John Anthony Goodman Roberts Jr., age 50.  Mr. Roberts joined Delta Air Lines 05-22-2000 and I believe was based NYC.  He is survived by his wife Jacqueline, plus his siblings and their families.
To view the obituary and guestbook online please visit
https://www.kuzoandfoulkfh.com/obituaries/2019/06/30/john-anthony-goodman-roberts-jr/
Obituary text is also available online at
https://obituariesus.com/pennsylvania/john-anthony-goodman-roberts-jr/
For those wishing to send a personal note, whitepages lists the family residence as
7 Richard Wilson Dr.,  Coatesville PA 19320-5102.
Should more news be received, we will pass along that information.
Thank you,
~ Carol for the PCN
Obituary...............
John Anthony Goodman Roberts, Jr., or “Tony” as he was affectionately called, passed away at age 50 on Thursday, June 27, 2019 at his home in Coatesville, PA.
He was the husband of Jacqueline I. Roberts, with whom he shared a beautiful 14 year marriage. Tony was the love of Jackie’s life.
Born in Barbados in 1968, he was the son of the late John Anthony Goodman Roberts, Sr. and the late Angela U. Gomes Roberts.
Tony graduated from Unionville High School in 1987 and spent his summers in the Bahamas working as crew on his Uncle John’s fishing charter boat.
Tony continued his education at West Chester University where he graduated with a degree in Marketing in 1992. While in college he worked to get his flight ratings at Chester County Airport. During that time, he also worked at the airport fueling and prepping airplanes and gaining as much experience as he could. He flew many private and corporate jobs before being hired by Delta Air Lines on May 22, 2000. Tony flew the Boeing 727, MD-88, and finally the Boeing 757/767 both domestically and internationally.
Tony was extremely dedicated to his career and worked diligently to become a success.
In his free time, Tony enjoyed hunting with his friends and family in Pennsylvania and on his 42 acre property in Ohio. His hobbies included flying RC model airplanes, collecting diecast model airplanes, fishing, and enjoying the company of his adoring family, his dogs, and close friends.
Tony is survived by his loving wife, Jacqueline; his three sisters, Carol Hargroves, Linda Myers and Gail Beare; as well as three brothers, Bruce Roberts, Jerry Roberts and Derek Roberts.
You are invited to visit with Tony’s family on Friday, July 5, 2019 from 6:00PM to 8:00PM at Kuzo Funeral Home, 250 West State Street, Kennett Square, PA 19348. A second Visitation will be held the following morning on Saturday, July 6, 2019 from 9:00AM to 10:00AM at the Christian Life Center, 125 Saginaw Road, Lincoln University, PA 19352. Services for Tony will begin at 10:00AM. Interment will follow at Faggs Manor Cemetery, 508 West Street Road, Cochranville, PA 19330.