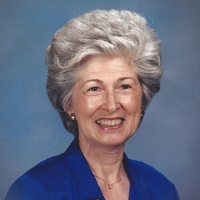 Notification with the passing of Delta Golden Wings member Ernestine Stewart, widow of C&S/Delta pilot Captain Edwin Roy Stewart.
Obituary information and guestbook may be viewed online at
https://www.cobbfuneralhome.com/obituary/ernestine-stewart
Arrangements were entrusted to Cobb Funeral Home of Blytheville, Arkansas.
Thank you,
~ Carol for the PCN
Obituary:  Ernestine Stewart
Marion Ernestine Stewart, age 94, passed away comfortably in her sleep in Roswell, Georgia on Sunday June 9, 2019.  She was born on August 30, 1924 in Blytheville, Arkansas to Ernest and Tina Mae Lyons Halsell. She often jokingly described the location as “Behind Flakes Fruit Stand”. But Ern was no Flake!  Raised in Blytheville she would grow to become a spirited, devoted, loyal and loving Daughter, Wife and Mother.
Her parents founded the Rustic Inn in Blytheville and with great success established the go-to place for outstanding Pork Barbeque, a family tradition which was to continue through the years even to this day at the famous Dixie Pig Restaurant. During her school years at Blytheville High school she was the head majorette of the Blytheville Band and worked in the family business where she often recalled barking out “Two pigs and a Coke!”.  Over the years and in supporting her family with the many Georgia baseball teams, Ernestine was loved and known by the teams, their families and her grandchildren affectionately as “Memaw”, a title she was very proud of. She also reportedly learned the art of “Hog Smooches”, which she frequently administered to flinching children and grandchildren (sorry Nelson). Still she was loved by all.
In 1943, Ern entered Lindenwood College, but soon opted for matrimony in 1944 to her U.S.  Army Corps and future Delta Air Lines Pilot, Captain Ed Stewart, who prematurely left this life in 1988.  “Aunt Ern” as so many friends and family fondly called her, established roots with her loving husband Ed in Blytheville, Arkansas, Memphis, Tennessee and finally Atlanta, Georgia, all the while raising their three sons; Ron, Don and John.
Sadly, over the years, her beloved parents; husband of 44 years, Ed Stewart; brothers, Melvin, Roy and Buddy Halsell; and sister, Annie Lee Halsell Scrape, preceded her in death.
Ern’s children, Ron and Carol Stewart of Scottsdale, Arizona, Don Stewart of Marietta, Georgia, John and Lindsay Stewart of Peachtree Corner, Georgia; brother, Johnny Halsell of Little Rock, Arkansas; grandchildren, Kristie Nolen of Cape Girardeau, Missouri, Andrew and Mary -Ann Maloney Stewart of Cape Girardeau, Missouri, Stephanie Stewart of Tucson, Arizona and Nelson Stewart of Peachtree Corners, Georgia; four great-grandchildren, Maddie Nolen, Blake Nolen, Griffin Stewart and Cooper Stewart and numerous nieces, nephews and friends all survive her.
A celebration of her wonderful life will be held Saturday, June 15, 2019 at 10:30 a.m. in the Cobb Funeral Home Chapel, 603 West Main Street, Blytheville, Arkansas, 72315 with the Rev. Mike Wey officiating. Burial will follow in Elmwood Cemetery. Although there will be no formal visitation, there will be a gathering of friends and family to remember her Friday evening, June 14th from 6:00 until 8:00 p.m. at the Dixie Pig in Blytheville.  If able to attend please bring a smile and a funny story or two to celebrate the life of this special lady.
-----------------------
https://www.findagrave.com/memorial/116525969/edwin-roy-stewart
C&S/DL Stewart, Edwin Roy Captain
DOB : 10-Jul-1919
Date of death : 25-Sep-1988 (age 69)
Joined Chicago & Southern 03-05-1951, retired with Delta Air Lines in 1979, based ATL
Posted by death at 9:54 PM