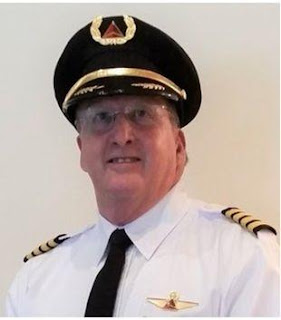 Notification with the passing of Delta pilot Capt. William George Langnau, age 62.  Captain Langnau joined Delta Air Lines 09-06-1990.  He is survived by his wife Jeannie plus many other dear friends and family members.
Captain Langnau’s obituary may be viewed online and share your memories at
https://www.lastingmemories.com/memorial/william-george-langnau
Obituary information is also available at
https://www.richmond.com/obituaries/langnau-william/article_14ef5b5c-4508-5958-bf16-11f38fdbcd4f.html
For those wishing to send a personal note, whitepages lists the family residence as
13808 Rockport Landing Rd., Midlothian VA 23112-2024.
Obituary below notes that no services are planned.
Thank you,
~ Carol for the PCN

Obituary…………. LANGNAU, William George, age 62, passed away on December 11, 2019. Born as the youngest of four, Bill moved extensively with his family across the states and in the Philippines. He leaves cherished memories to his loving wife, Jeannie; many nieces and nephews and other family and friends as he battled cancer of the appendix since 2015. Graduating from the University of New Mexico in 1979 with a business degree and in the Reserve Officers' Training Corps (ROTC), Bill was able to immediately begin his dream job as a fighter pilot for the U.S. Air Force. After marriage and dueling careers, he proudly joined Delta Air Lines, leaving as a captain on the 757/767 ER. One of the highlights was flying a trip literally around the world.
Bill was born a natural athlete - excelling as a youth at bowling, wrestling, basketball, baseball, scuba diving, track and football. Later he coached football for 10 to 12 year olds for several years. He learned tennis for his wife... until he could beat her! Once settled here in Virginia, his passion became golf and watching sports. He loved his home - boating, fishing or just watching birds on the lake, beautifying the gardens, playing bridge or another game or cooking a special meal with family and good friends. He never lost his sense of humor, even in his last days.
No service is planned at this time. He was honored to have so many friends and family celebrate his final days with him.