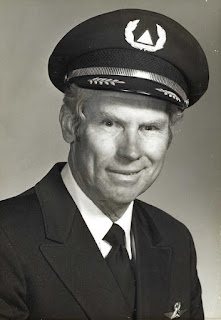 Word has reached our group with the passing of retired Northeast/Delta pilot Captain Frank Harvey ‘Pete’ Peterson, age 99.  Captain Peterson joined Northeast Airlines 11-04-1942 and retired with Delta Air Lines in 1980, based Atlanta at time of retirement.  Widowed in January 2010 with the passing of his wife Mary, Captain Peterson is survived by their children plus their grand- and great grandchildren.
Obituary information and an online guestbook is available at the funeral home website
http://foxandweeks.com/    or go directly to
http://foxandweeks.com/memorial/Frank-Harvey-Pete-Peterson/7980#sthash.mCQJv319.dpbs
Obituary may also be viewed online at
https://www.legacy.com/obituaries/savannah/obituary.aspx?n=frank-harvey-peterson&pid=194719623
Services have been entrusted to Fox & Weeks Funeral Directors, Hodgson Chapel  (912) 352-7200.
Obituary notes that there will be services at St. James Catholic Church in Savannah at a later date, interment on Vinalhaven Island, Maine.  Mary’s obituary may be viewed below as well.
Thank you,
~ Carol for the PCN

He was married for 67 happy years to Mary Dorothea Riley Peterson (deceased in 2010).

Upon graduation from Vinalhaven High School in 1938 he attended the University of Maine with a mind to be a mechanical engineer.  However, Uncle Sam was looking for pilots, as WWII was ramping up.  After taking flying lessons in college he realized how much he loved flying and changed his career path.   During the War, Pete flew many missions in the C47 shuttling cargo and passengers to Iceland, Greenland, and across Africa.  Upon completion of the War, he flew for Northeast Airlines flying throughout New England and then initiating the new 727 “Yellowbirds” from Boston to Miami.  Later Northeast merged with Delta and opened routes across the U.S. and Europe.  The Peterson family moved to Lighthouse Point, FL from Beverly, MA and later to Hilton Head, SC, as Pete’s career progressed.

In 1980 he took mandatory retirement after completing and loving his 39 years of flying.  In his retirement, he returned every summer to his beloved Vinalhaven Island with Mary and his trusty Shopsmith, with which he built his island home. Pete served on the board of the Medical Center there as well as other community activities.

Pete’s faith was an integral part of who he was. He was very involved with his Catholic Church community on Hilton Head and in Savannah where he and Mary spent their later years.

Mary and Pete loved both of their island homes where you could find them entertaining family and friends, boating in one of the many crafts they had over the years, or taking advantage of free flying and trotting around the globe!  They shared many an adventure together.

Despite his travels, Pete remained the classic New Englander, “use it up, measure twice, cut once, a penny saved is a penny earned.”  An accomplished carpenter, plumber and electrician, he was self-reliant and generous with his time, skills and his love of community and family.  Often surrounded by competitive talkers, we have all learned from Pete’s quiet example.

There will be a Memorial Mass at St. James Catholic Church in Savannah at a later date and an interment on Vinalhaven Island, ME.

Mary was born in Portland, ME on January 25, 1921, the only child of James Augustine Riley. She never knew her mother, Dorothea Perrin Riley, who died during childbirth in 1923.

After attending Westbrook College, Mary worked for a short while for Ma Bell (i.e. the phone company), before becoming a flight attendant for Northeast Airlines. It wasn't long before she met the love of her life, and husband of 66 years, Frank (Pete) Peterson.

Mary would be the first one to tell you that being a flight attendant was not for her, and after marrying Pete (her pilot) in 1943 her "real" life began. They settled in MA; after four homes and four children there, they moved with the airlines to south Florida in 1960. The sunny south brought out new life styles, hobbies and sporting activities including tennis, boating, fishing and not to mention being involved in all the kid's activities from middle school, high school and college.

In 1973, when Delta merged with Northeast, Mary & Pete established a home on Hilton Head Island where they lived for 34 years. In 2005, Mary and Pete moved to The Marshes in Savannah, GA.

Throughout married life the family spent summers on Vinalhaven, a small island fishing village off the coast of Maine where Pete was born and raised. The love she received from her husband's parents, as well as her husband and children, was very important.

Vinalhaven became the gathering-place for the entire family-children, their spouses, grandchildren, and great-grandchildren.

Mary enjoyed her family first and foremost. She had a rich life full of travel, a wide circle of friends, a fanatic love of bridge, crossword puzzles, reading and anything that involved family, friends, food and laughter.