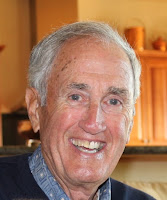 RNPA friends have notified us with the passing of retired Northwest pilot Captain John E. McAlpin, age 85: “Captain John McAlpin, age 85, passed away this past Saturday December 14, 2019 after a long illness. John grew up in Saint Cloud, Minnesota, attended Saint John's University before joining the USMC as a MARCAD (Aviation Cadet). After his USMC service John signed on at NWA and flew for 35 years, retiring on the Boeing 747-400.”  Captain McAlpin joined Northwest Airlines 3-13-1959.  He is survived by his wife Marianne, his children and grandchildren.
Obituary may be viewed and share memories online at
https://www.dignitymemorial.com/obituaries/centennial-co/john-mcalpin-8962712
Please see obituary below for services and additional information.
Thank you,
~ Carol for the PCN

Obituary……………John Edward McAlpin, age 85, of Castle Rock, Colorado passed away on Saturday December 14, 2019. John was born September 16, 1934 in Minneapolis, Minnesota.
John grew up in Saint Cloud, Minnesota where he attended Saint John's University before joining The United States Marine Corps. He received his Pilot Wings at the Pensacola Naval Air Station before being stationed at various bases around the world. After his service, John continued his passion for flying by joining Northwest Airlines as a Commercial Pilot. He retired after 35 years as a Captain on the Boeing 747-400.

John met the love of his life, Marianne Louise Kvam, in the Fall of 1973 and the couple married on May 5, 1974 before welcoming two daughters into the union.

John loved hunting and fishing with his fellow RAMS, attending sporting events, golfing with friends, and was an avid reader. He enjoyed traveling the world with his family and spent many summers in Norway. After retirement, John and Marianne frequently traveled to Sydney, Australia where they met many lifelong friends. In later years, the pull of family and new grandchildren brought John and Marianne to Colorado.

John is preceded in death by his parents, Thomas James McAlpin and Mary Agnes Connolly; his infant brother, Robert McAlpin; and his brother, Thomas McAlpin. He is survived by his wife of 45 years, Marianne; his daughters, Erin (Greg) Eiselein and Kara (Matt) Burnham; his grandchildren, Christopher, Kari, Jack, and Marin; his sisters, Sheila Anne (John) Lohmann and Mary Margaret (Dennis) Brennan; and numerous nieces and nephews.

A Memorial Service will be held in Edina, Minnesota in May 2020; more information will follow. John will be laid to rest at Fort Snelling National Cemetery in Minneapolis, Minnesota.

Memorial contributions may be made in John's memory to the Alzheimer's Association.
Fond memories and expressions of sympathy may be shared at www.olingerchapelhill.com  for the McAlpin family.