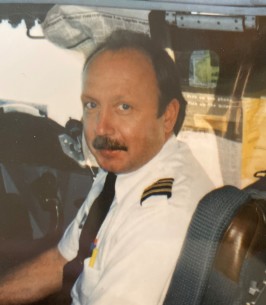 Notification with the passing of retired Northwest/Delta pilot Captain Don Allen Keener, age 63.  Captain Keener first joined Northwest Airlines 08-09-1985.  He is survived by his wife Nancy, also by their children and grandchildren.
A video tribute and family photo gallery along with Captain Keener’s obituary may be viewed online at
https://www.maconfuneralhome.com/memorials/don-keener/4053782/index.php
Thank you,
~ Carol for the PCN

He is survived by his wife, Nancy Keener, his three daughters, Brandy Highsmith and husband, Omar Highsmith, Kalee Renee Keener, Paige Marion Keener and two grandsons, Knight and Simeon Highsmith all of Destin, FL. Don was preceded in death by his father, John H. Keener and his mother Hester Hedden Keener; a brother Terry Dean Keener; and a sister Renee Gwen Treyvig.

Don’s passion for life was contagious and he enjoyed spending his time with family and friends. He loved dancing with Nancy, and watching his daughters compete in Equestrian competition, he enjoyed riding motorcycles with his friends, and loved collecting classic Ford cars.

Don was an accomplished man and received many awards for outstanding achievements during his life. He graduated high school as valedictorian. Following his graduation in 1974, Don had the prestigious accomplishment of being accepted into the Air Force Academy. Don graduated with honors from the Air Force Academy and flew as a fighter/tank pilot from 1978 to 1982. During Don’s service in the Air Force he achieved the rank of Captain and received the Air Force Outstanding Unit Award, Air Force Training Ribbon, Air Force Training Longevity Service Ribbon, Armed Forces Expeditionary Medal and National Defense Service Medal. Following Don’s military service, he moved to Destin, FL and started his career flying for the commercial airlines. He flew for Northwest and Delta Airlines from August 1985 to December 2019, where he was flying international routes as a Captain. In addition to his flying career, Don was an accomplished custom builder in Destin.

Funeral services will be held Saturday, December 14, 2019 at 11:00 a.m. at Yellow Mountain Baptist Church with Carl Stepp officiating. Burial will be in Stewart Cemetery.

The family will receive friends from 10:00 to 11:00 Saturday, one hour prior to the service at the Church. Flowers may be sent to Macon Funeral Home, Franklin, N.C.

In lieu of flowers, donations may be made to Stewart Cemetery Fund, C/O Carl Stewart, 3295 Yellow Mountain Road, Cullowhee, NC 28723.

Condolences can be made to the family at www.maconfuneralhome.com