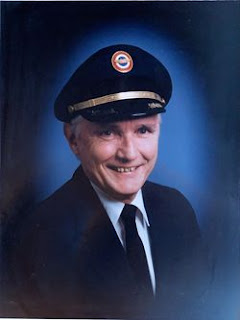 Belated notification with the passing of RNPA member retired Northwest pilot Captain James Allen Bestul, age 86.  Captain Bestul joined Northwest Airlines 03-13-1959.  He is survived by his wife Nancy, their children and grandchildren, plus many other dear friends and family members.
Obituary information is still available online at
https://www.washburn-mcreavy.com/obituaries/James-Bestul/#!/Obituary
See also https://www.findagrave.com/memorial/204757410/james-allen-bestul
For those wishing to send a personal note, whitepages lists the family residence as
4964 Devonshire Circle, Excelsior MN 55331-9329.
Thank you,
~ Carol for the PCN

Obituary……… for James Allen Bestul
Bestul, James Allen of Excelsior age 86 (Jim) Beloved husband of 60 years of Nancy (Chapman) Bestul flew west for the last time on Nov 7, 2019. Son of Sylvan and Rebecca (Ensberg) Bestul. Born in Washington DC. Grew up in Arlington VA and Bremerton WA. Graduated from Capital U in 1955. Served proudly as a Naval Aviator and was a pilot for Northwest Airlines for 34 years. He loved flying, airplanes and sailing but loved all the special family times even more. Summers sailing on Lake Superior was a family highlight for many summers. Once computers became available in the '80's he embraced the technology with enthusiasm. A pencil and paper project categorizing all American airplanes became a huge computer program of over 8000 airplanes. This program, which was still growing at the time of his death, is at the Smithsonian Air and Space Museum. He is survived by brother, Bruce (Geraldine); sons, Greg (Terri) and Doug (Rhonda); a proud Papa/Grandpa of Kimberly, Erica, Laura, Matthew and Alex. Services on Monday Nov. 18 at 10 A.M. at Mt. Calvary Lutheran Church, 301 County Rd. 19, Excelsior. Visitation one hour prior to service. Interment at Ft. Snelling. In lieu of flowers donations please to American Lung Association, 55 Wacker Dr., Suite 1150, Chicago, IL 60601 Lung.org. Washburn-McReavy.com Strobeck Johnson 952-938-9020
‘‘‘‘‘‘‘‘‘‘‘‘‘‘‘‘‘‘‘‘‘‘‘‘‘‘‘‘‘‘‘‘‘‘‘‘‘
http://www.startribune.com/jim-bestul-pilot-who-loved-all-things-aviation-dies-at-86/565381002/
Jim Bestul, Pilot Love of flying led to immense aircraft cataloging project
Star Tribune: Newspaper of the Twin Cities (Minneapolis, MN) - Sunday, November 24, 2019

James "Jim" Bestul lived and breathed airplanes. He flew Navy seaplanes, commercial planes for Northwest Airlines and his own private aircraft in his spare time.

Still, there were thousands of other planes out there. He started cataloging all U.S. planes, meticulously recording details like engine type, tail configuration and how many of each was built. The database, which encompassed more than 15,000 planes, caught the attention of the Smithsonian National Air and Space Museum, where some of the records are kept today.

"He just loved airplanes," said son Doug, an Apple Valley pilot. "That whole dimension of being able to fly gets in your blood."

The oldest of two boys, Bestul was born in Washington, D.C., and grew up in Virginia and Washington state. After graduating from Capital University in Columbus, Ohio, he joined the Navy in 1955 and began flying seaplanes, a path that took him to Bermuda.

There he met Nancy Chapman, who was teaching sixth grade at a school for military dependents. She had mutual friends with Bestul, who bore a resemblance to Johnny Carson, she recalled. The couple hit it off at a squadron party.

"I was absolutely blown away," she said. "I knew right then and there."

They married in 1959 and moved to Bloomington, where Bestul flew for Northwest Airlines. After being laid off, he re-entered the Navy and eventually flew support transport planes for the Blue Angels, the flight demonstration squadron known for its aerobatics. By the time the family returned to Minnesota in 1964, the couple had two sons, Doug and Greg.

He was "a very hands-on dad," Nancy Bestul said, leading his sons' Boys Scout troops, teaching them woodworking and taking the family on sailboat excursions that began on Lake Minnetonka and later moved to Lake Superior. She remembered her husband tying balloons to the sailboat's shrouds and letting the children shoot them down.

Quiet, calm and confident, he was suited to sailing and flying, Nancy Bestul said, since "nothing seemed to ruffle his feathers."

Jim Bestul began his plane cataloging project in the 1970s and learned computer languages so he could transfer the paper-and-pencil records to a database in 1982. "He became a very early adopter of computers and technology," Doug Bestul said. "He was a gadget guy."

His collection, which included registration numbers for 855,000 individual planes, landed at the Smithsonian after staffers from an airplane magazine told the museum director about the project. In exchange, the museum sent Bestul laserdiscs featuring photos of 200,000 planes to add to his database.

"He was like a kid in a candy store," Doug Bestul said.

His childlike side also came out with his grandchildren, who relished playing dolls with him, said his granddaughter Erica, of Minocqua, Wis. She remembers that when she and her sister, Laura, were afraid of venturing downstairs at their grandparents' house, their "Papa" invented a "Ghostbusters" game and played it for years, calling in pretend ghost sightings while wearing special shirts, writing on custom stationery and talking over a real intercom. They used a garden hose to fight off spirits, Erica Bestul said.

"He was so good with us, so patient," she said. "He was definitely the glue that held our family together."

Besides his wife, son Doug and granddaughter Erica, Bestul is survived by son Greg of Lester Prairie, Minn.; brother Bruce of Apple Valley, Calif.; and four other grandchildren. Services have been held.