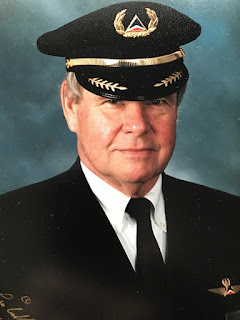 Notification with the passing of Delta Golden Wings member retired Delta pilot Captain Michael Langford Greene, age 82.  Captain Greene joined Delta Air Lines 02-14-1966 and was based Miami.  He is survived by his wife Claudia, his children plus grand- and great grandchildren.
Captain Greene’s obituary may be viewed online at
http://wallis-wilbanks.blogspot.com/2019/12/michael-langford-greene-graveside.html
Arrangements entrusted to Wallis-Wilbanks Funeral Home of LaFayette, Georgia.
http://wallis-wilbanksfuneralhome.com/HOME.html
For those wishing to send a personal note, and to the best of our knowledge, the family’s home mailing address is
P.O. Box 37, Southport  ME  04576-0037.
If more is learned, we will be sure to pass along all updates.
Thank you,
~ Carol for the PCN

Born on July 26, 1937 in Ft. Myers, Florida, he lived in Miami, Florida until he graduated from Coral Gables High School. His family moved to Stuart, Florida where his father started Bill Greene Chevrolet. He later attended the University of Florida. In 1966 he went to work for Delta Airlines retiring in 1999 after 33 years of service. His last airplane that he flew was the L1011 going from Atlanta to Frankfort, Germany. He was a member of Coral Reef Yacht Club in Miami, Florida. Boothbay Harbor Yacht Club in Maine, where he served as Commodore and also a member of Boothbay Harbor County Club. Michael was an avid boater on the Florida Coast, Bahamas and the Maine Coast. He was a member of St. Mary’s Episcopal Church in Stuart, Florida and later attended All Saints by the Sea Episcopal Church, Southport, Maine. He enjoyed reading, hunting and traveling.

His funeral service will be a graveside service at LaFayette Cemetery on Friday, January 3, 2020 at 2pm.

In lieu of flowers, the family requests that donations be made to All Saints by the Sea Episcopal Church, Southport, Maine 04576.