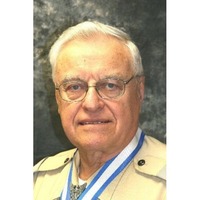 This news was received via our website…..
notification with the passing of retired North Central/Republic/Northwest Airlines pilot Capt. Richard Crandall Phillips, age 82.  Captain Phillips is survived by his wife Sarah, his children and his grandchildren.
Obituary and guestbook information is available online
at https://www.whitefuneralhomes.com/obituary/richard-phillips
Services for Captain Phillips are planned for January 17 at White Funeral Home of Burnsville, Minnesota.
For those wishing to send a personal note, whitepages lists the family residence as
73 Birnamwood Drive, Burnsville, MN 55337.
Thank you,
~ Carol for the PCN

Dick Phillips was born 6/25/37 in Lake Forest, Ill. To Harry and Mary Phillips.  They lived in a house attached to the Deerpath station of the Chicago North Shore Railroad. His parents both worked for the railroad and Dick grew up in that station. He grew up very involved in Boy Scouts earning his Eagle Scout and had a passion for photography. After finishing school, he went to the Art Institute of Chicago for photography. After his first semester at the school, the teacher approached him and told him that obviously he didn’t need to be there as he knew everything already. He refunded his tuition and gave him a job as the dark room instructor for the second semester.

Dick then joined the Airforce and wanted to be a photographer for the Airforce. After taking all his entrance test, he scored too high and was told he could not be a photographer but instead would be in air traffic control. He was very proud to be involved in the S.A.C. during his service and even became the Boy Scout leader for his base scout troop while stationed in England.

Dick met his first wife Fransizka in Europe and after his service moved back to Chicago where his son Frederick was born. He married his second wife Sarah and had three children Mark, Heather and Alan raising his family in Apple Valley, MN.

Richard started working in the airline industry including Butler Aviation in Chicago, Mississippi Valley Airlines, North Central Airlines, Republic Airlines, Northwest, Airlines and eventually retiring from Delta Airlines. Dick had a lifelong interest in aviation, mostly WWII aircraft. Dick was a P-51 mustang historian and possibly the world’s most knowledgeable source of information about civil Mustangs writing and photgraphing for numerous aviation publications all over the world. He volunteered with the Experimental Aircraft Association Warbirds at the annual convention and airshow (Airventure in recent years) for the past 52+years.

After retirement Dick continued working with the Boy Scouts participating on the Board of Reviews and teaching the aviation and photography badges at various camps every year. He loved fishing and often went to the senior center to play cribbage. He spent a lot of time teaching his grandkids all about airplanes and fishing or just playing cards.  Rachel, Ryan, Julia, Alexandra, Lane Harrison, John, Penny, Emmett and Patrick all meant the world to him. He once said, “being a grandparent is the reward you get after all those hard years of being a parent”.

Dick will be missed by family and friends all around the globe.