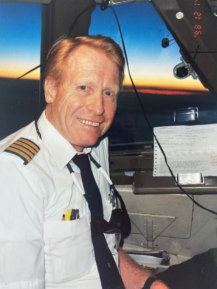 Word has been received with the passing of RNPA member retired Northwest pilot Captain Richard ‘Dick’ Anthony Hauff, age 79.  Captain Hauff joined Northwest Airlines 04-21-1969.  He is survived by his wife Carol plus many aviation colleagues and friends.
To view the obituary online and share your memories please visit
https://www.shikanyfuneralhome.com/obituaries/Richard-Hauff/
For those wishing to send a personal note, whitepages lists the family’s Florida residence as
20066 Wolfel Trl # 2101 , Estero  FL 33928.
If more is learned we will be sure to pass along all updates and/or corrections.
Thank you,
~ Carol for the PCN

Obituary……………Richard A. Hauff
A lover of country, church, and Carol, his wife of twenty years, Dick Hauff cherished all until his quiet death on December 9, 2019. Born November 18, 1940, and raised near Philadelphia, he graduated West Chester and Temple Universities, became a Navy Seal, and subsequently a pilot for Northwest Airlines. Retirement to Florida brought the chance for much fun and worldwide travel including visits to see Pop Pop's grandchildren in Hawaii.

Dick remained strong in his faith so it is most fitting that a memorial mass will be held in his honor on January 11, 2020, 12:30 PM, at Our Lady of Light Catholic Community Church in Estero, Florida.

Online condolences may be offered by visiting www.ShikanyFuneralHome.com
Arrangements are being handled by Shikany's Bonita Funeral Home.

Retired NWA captain Richard passed away peacefully in his sleep last night at age 79. Dick and his wife Carol reside in Estero, Florida.