Please see all available information below.  Obituary may also be viewed online at
https://www.parrottfuneralhome.com/obituaries/James-Fields-23/
Thank you,
~ Carol for the PCN

<<<<<<<<<<<<<<<<<<<<<<<<<<<<<
From: David L. Roberts <robertsDL@mindspring.com> Sent: Wednesday, April 1
CARES AND CONCERNS
Thank you to retired Crew Scheduler Ms.Doris Davidson who called me this morning with the sad news of the death of retired Delta Captain James H. Fields, 95.  Captain Jim was born 2/27/1925 and hired by Delta 8/30/1950.  Ms. Doris said she was called by Mrs. Carolyn Fields, Jim's wife, who told her that Jim died about 8:00 pm last night, 3/31/2020.  He had been quite ill for some time and had been in hospice care at their home, but death was due to natural causes she said.  The funeral home told her that they were limited to only ten persons at a funeral so there will only be a graveside service for just family members.
For those wishing to send a personal note of condolence, the address is:
Mrs. James H. Fields
P.O. Box 915
Palmetto, GA 30268-0915
or email Fields Carolyn  chf1234@aol.com 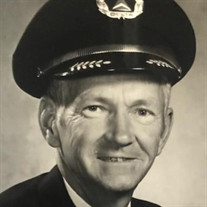 Mr. James Hardy (Jim) Fields of Newnan passed away March 31, 2020. Jim was a retired L-1011 captain with Delta Airlines after 35 years of service and was a U.S. Veteran, having served in the Army Air Corps. He was preceded in death by his son, Andy Fields and is survived by his wife, Carolyn Hale Fields; children, Steve Fields and his wife, Cookie of Texas; Ken Fields and his wife, Elizabeth of Marietta; Mary Catherine Fields of Atlanta; grandchildren, Brian Fields, Jenny Fields and her husband, Brandon, Melissa Latil and her husband, Nathan, Stephanie Rittenhouse and her husband, Trey; great grandchildren, Oliver, Ian, Noah, Elle, Jake, Harper, Ritt, Dalton, Wyatt; special friends, Aubrey Burnette and Frank Jones. Due to recent public health concerns a Celebration of Life service will be held at a later date. Those wishing may sign the online guest registry at www.parrottfuneralhome.com
Parrott Funeral Home and Crematory. 770-964-4800