~ IN MEMORY ~
DL Capt. Charles ‘Charlie’ Yates, Lt. Col, USAF (Ret.) & Viet Nam veteran
July 14, 1949 ~ September 22, 2012
Word has been received of the tragic fatal accident involving retired DL Captain Charlie Yates.  Born/raised in Texas, Charles Dwight Yates was 63 years of age at the time of his death Saturday afternoon September 22nd.  Charlie was a decorated and experienced pilot who had a 20-year career in the USAF before hiring on with Delta 04-30-1991.  Charlie was an author.  His book Mount Up With Wings As Eagles  photographically chronicles his experiences flying the F-15 Eagle during the Cold War.  Charlie was active with his church and community always ready to lend a hand.  Charlie was a flight instructor and that’s what he was doing on Saturday when their plane crashed near Roanoke TX.
Captain Yates is survived by his wife Diane Coggins Yates.  Arrangements are still pending.  That information will be posted when it becomes known.  Personal condolences may be sent to the Yates family at 2613 Kimberly Drive,  Grapevine TX 76051-2625   ...  (817) 481-6882
Thank you,
~ Carol
========================================
~ He had been scheduled to teach at an assisted living facility on Sunday. His topic: "Heaven."
http://www.wfaa.com/news/local/Family-speaking-out-about-pilot-who-died-in-Roanoke-crash-170911651.html
Family speaking out about pilot who died in Roanoke crash
Posted on September 23, 2012 at 6:51 PM
Small plane crashes near Roanoke; two dead
GRAPEVINE TX — The family of a flight instructor who was one of two men killed in a plane crash near Roanoke is speaking out abut Saturday's tragedy.
Charlie Yates and Chris Pratt were killed when their plane went down shortly after taking off from Northwest Regional Airport.
Yates, 63, was a decorated and experienced pilot who had a 20-year career in the U.S. Air Force — including duty in the Vietnam conflict — and a second career as a Delta Air Lines captain.
More recently, he served as a flight instructor, and that's what he was doing on Saturday in Pratt's Piper Arrow single-engine aircraft.
At the family's Grapevine home, Diane Yates said her husband had been working with Pratt for the past week or so. Yates told her that Pratt had the fundamentals down and knew what he was doing.
Christopher Pratt's family told News 8 that he had been brushing up on his piloting skills and that he was a licensed pilot. He leaves a wife and two young daughters.
More than one person News 8 spoke two referred to Yates as a "hero."
Yates was said to have had three passions in life: His family; flying; and studying Scripture.
He had been scheduled to teach at an assisted living facility on Sunday. His topic: "Heaven."
The Yates home on Sunday was not filled with grief, but rather with laughter and smiles — people telling stories about the man who was also an adventurous prankster.
In addition to his wife, Yates leaves an adult son, a daughter, and seven grandchildren.
====================================== 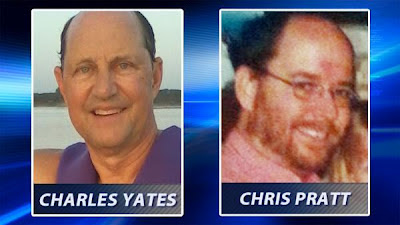 Charles Yates and Chris Pratt were killed Saturday when their small plane crashed shortly after takeoff from Northwest Regional Airport.
http://www.star-telegram.com/2012/09/22/4280485/small-plane-crash-in-roanoke-claims.html
Two die in Roanoke small plane crash, pilot and flying instructor
Posted Saturday, Sep. 22, 2012
ROANOKE - A pilot and a flying instructor were killed after an airplane crashed in a heavily wooded field in southern Denton County on Saturday afternoon.
The instructor, 63-year-old Charles Yates of Grapevine, was taken by helicopter ambulance to John Peter Smith Hospital in Fort Worth with serious injuries and then died less than two hours later, authorities said.
Christopher Pratt, 41, a licensed commercial pilot from Argyle, was pronounced dead about 1:30 p.m., according to the Tarrant County medical examiner's office. Pratt, the plane's owner, reportedly was training to become a flying instructor himself.
His Piper Cherokee PA-28 R180 attempted a take off heading south but quickly lost attitude and pancaked into a wooded area in Northlake shortly before 1:20 p.m., about a half mile from the runway of Northwest Regional Airport, said Lonny Haschel, Texas Department of Public Safety spokesman.
The wings of the aircraft broke off and ended up in trees while the fuselage crashed into the ground, Haschel said.
Pratt was killed on impact, Haschel said.
Read more here: http://www.star-telegram.com/2012/09/22/4280485/small-plane-crash-in-roanoke-claims.html#storylink=cpy
~~~~~~~~~~~~~~~~~~~~~~~~~~~~~~~~~~~~

I have just been notified that Retired Delta Pilot, Charles "Charley" Yates, was killed in a private airplane crash yesterday in the Grapevine, Texas area.  I will provide more details later.

From: Brian Muirhead <brianmuirhead@ymail.com>
Date: September 24, 2012
Charlie Yates, a retired Delta pilot, was killed in a small plane crash in Denton County,TX, Saturday, September 22, 2012. He was an authentic Christian man and will be greatly missed. Arrangements are pending.
Brian Muirhead

Book:     Mount Up With Wings As Eagles
By Charlie Yates, Lt. Col, USAF (Ret.)
About the book:  Mount Up With Wings As Eagles photographically chronicles the author's experiences flying the F-15 Eagle during the Cold War. View breath taking photos of all aspects of the Eagle and its air superiority mission.
About the author:  I was commissioned a 2nd Lieutenant through the Air Force ROTC program at Texas Tech University and entered Undergraduate Pilot Training at Reese AFB, Texas in 1971. My first assignment was as a Forward Air Controller flying the OV-10 Bronco in Vietnam, Laos, and Cambodia. I returned to Reese AFB in 1973 as a T-38 instructor and received an F-15 assignment to Holloman AFB, New Mexico in 1978.
I was extremely fortunate to be able to fly the Eagle for eleven years; four years at Holloman AFB, four years at Elmendorf AFB, Alaska, and three years at Luke AFB, Arizona. Those assignments encompassed flying with six different squadrons and included over 2200 hours of flying time, nine Red Flags, countless other exercises and deployments, an ocean crossing to Lahr AB, Germany, and many hours studying and refining tactics in air superiority.
--------------------------------
http://www.biplaneforum.com/photo/lsa---tommy-and-39s-toot-5485.html 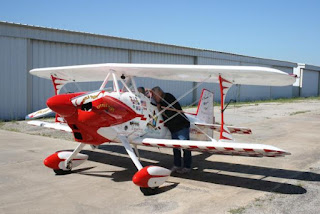 Charlie Yates is preparing to take Tommy's Toot up so he can check the stall speed. The author has flown this test in the past and verified a stall speed of 46 MPH. Tommy would like another experienced pilot (Charlie flew OV-10's in Viet Nam and F-15's for most of the remainder of his career in the USAF. After the USAF he flew for the airlines. After retiring from both USAF and airlines, he now works as Chief Flight Instructor for MarcAir where he teaches everything including aerobatics.)
Posted by Unknown at 4:05 AM