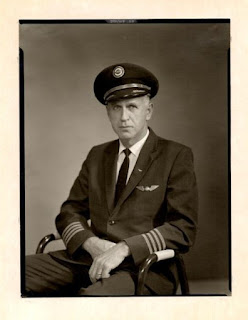 Word with the passing of RNPA member retired Northwest pilot and author Capt. Lyle Thrall has reached us.  He was 93 years of age at the time of his passing.  Captain Thrall joined Northwest Airlines 09-11-1950.  He is survived by his wife Dorothy 'Dottie', their children, grandchildren and great grandchildren.   To view the online obituary and sign the online guestbook please visit the funeral home website at http://www.havenrest.com/notices/Arthur-Thrall
Should we receive more information as to services, we will be sure to pass it along.
Thank you,
~ Carol for the PCN

Lyle Thrall (1923-2016) passed away October 16, age 93, after suffering several strokes, starting in 2008.  He had been in nursing care for almost 4 years.
He is survived by his wife of 57 years, Dorothy Stone Thrall. (Dottie) And three daughters, Margaret (Peggy) Claar, Polly Thrall, and Barbara Thrall, her husband, Russ Pfeiffer.  There are grandchildren Josh and Jacquie Claar,  Sanna and Matt Dyhre, Danae and John Thiel, Neil and Hannah Woods.  Great Grandchildren Adera and Waylon Thiel, Charlee and Ruby Dyhre, Rex and Harrison Claar. Also nephews and nieces, and cousins.
Lyle grew up in Tacoma, WA and Gig Harbor, WA and graduated from Gig Harbor Union High School with honors.  He went to work at the Bremerton Navy Yard as a machinist to earn money for college.  When the war started, he was required to stay at the job there until in 1943, he was released and joined the Army Air Force cadet program.  He had almost reached graduation when the war ended and he was honorably discharged.  He went on to St Louis University, Parks College, and graduated in 1950 with degree in Aeronautical Engineering.  He had accrued many flying hours while in school.  The Air Force called him back during the Korean War and he served in Japan during that service.  After the war, he applied with Northwest Airlines and took a job in the hangar while he waited for an opening.  Finally, in 1953 he began pilot training.  During his years with NWA, he flew almost every aircraft from DC-3 to 747.  He loved his years flying, and the people he worked with.
In 1958 in Crew Schedules he met his future wife, Dottie Stone, and they were married February 14, 1959.  They had 57 years together, raising their family, traveling with dear friends Gene and Barbara Brockett, boating with them and yacht club friends.  After boating years, a motorhome was bought and they traveled the US, Canada and Mexico.
There will be no service now but at a later time, his ashes will be in the Puget Sound that he grew up loving and boating on.