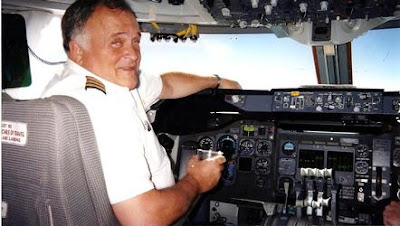 Word has been received with the passing of RNPA member retired Northwest pilot Captain Paul 'Alex' Geiger, age 77.  Captain Geiger joined Northwest Airlines 11-04-1968.  He is survived by his wife Mary Ann 'Bunny', their children and grandchildren, and many other family members and friends.  Services for Captain Geiger were held October 24th in Crosslake, Minnesota.  To view/sign the online guestbook please visit the funeral home website at http://www.klinefuneralhome.com/fh/obituaries/obituary.cfm?o_id=3947772&fh_id=13117
Thank you,
~ Carol for the PCN

“Alex” Geiger (1939-2016) passed away on October 14, 2016, after a long battle with complications from Diabetes. He is survived by his wife, Mary Ann (Bunny) Geiger, his daughter Becky Geiger (son-in-law Joseʹ, grandsons Alex & Dominique), son David Geiger (daughter-in-law Kori, grandson Martin), son Paul Geiger (daughter-in-law Mercedes, grandsons Michael and Sam), sisters JoAnn Ewoldt (James) and Leah Heinemann (Mark), brother-in-law Dave Thomson (Lynn), and beloved nieces and nephews. He is also survived by a brother-of-the-heart, George Bond, and many other precious friends.
Alex grew up in St. Louis, Missouri, attended the University of Missouri where he participated in wrestling and football. He joined the Marine Corps where he was a fighter pilot in Viet Nam and retired from the Corps as a captain. His skills as a military pilot earned him the Distinguished Flying Cross and 23 Air Medals. He then became a commercial pilot for Northwest Airlines where he worked for 39 years, retiring as a 747 captain. He loved his work and looked forward to each and every trip.
Shortly before his retirement, he and Bunny moved permanently to their cabin in the Crosslake area where there were no more sad Sundays when they had to return to the cities.
Alex was beloved by all because he only saw the good in people. He was a great big “teddy bear,” and will be sorely missed.
His service will be at the Crosslake Lutheran Church (35960 Co. Rd. 66; Crosslake MN) on Monday, October 24th at 1:00 P.M. Visitation will begin an hour prior to the service. Burial will follow at Norwood Cemetery, Pine River, MN, followed by a meal at the fellowship hall at Faith Lutheran Church, Swanburg MN.