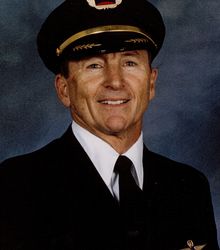 Belated notification with the passing of retired Western/Delta pilot Captain Daryl Thomas Martin, age 73.  Captain Martin joined Western Airlines 11-28-1972 and retired with Delta Air Lines, based LAX.
Captain Martin’s obituary may still be viewed online at
http://obittree.com/obituary/us/arizona/gilbert/falconer-funeral-home/daryl-martin/2742761/
or through the funeral home’s website at
http://www.falconerfuneralhome.com/book-of-memories/2742761/Martin-Daryl/service-details.php
Captain Martin’s obituary indicates he is survived by his wife Carol, their children and grandchildren.
Per whitepages, I see their residence listed as
3148 E. Encanto St., Mesa AZ 85213-6110  ...  (480) 985-6237
Additional information and/or corrections are always appreciated.
Thank you,
~ Carol for the PCN
Obituary....................
Daryl Thomas Martin was born November 10, 1942 in Wagner, SD, and died October 19, 2016 in Mesa, AZ after a lingering illness. Daryl was the second of four children born to Nyle and Florence (Deuschle) Martin where they lived on the family farm homesteaded by Daryl's grandfather, Jesse Martin. The work ethic he learned on the farm translated into a lifetime of dedication to hard work.
Daryl participated in multiple sports and went to South Dakota State University on a football scholarship, becoming one of the tri-captains of the team his senior year, where he also sang in a barbershop quartet called the Muscletones with three other athletes.
Newly graduated, newly commissioned as a 2nd Lt in the USAF and newly married to his college sweetheart (Carol Longwood of Lemmon, SD), the young couple left their beloved home state of SD in January of 1965 for Texas, awaiting orders for pilot training where he was ultimately assigned to Williams AFB, Chandler, AZ and trained in the T-37 and T-38, receiving the Officer Training Award for his class. He chose an assignment with Air Training Command upon graduation and returned to 'Willie' as a T-38 instructor pilot for the next 4 1/2 years. While in the AF, Daryl joined the rifle team and received many awards as a sharpshooter.
For the next 2 years, Daryl worked at Falcon Field as a private pilot instructor, and became an instructor pilot for Lufthansa Airlines, training German pilots prior to being hired by Western Airlines in 1972. Western merged with Delta, and during his 30 year career, Daryl flew multiple aircraft including the 737, 727, and 757-67, and was one of the first pilots to train on the MD-11, retiring in 2002.
Daryl enjoyed sports and participating as a volunteer coach for his daughters through their growing up years. Summer softball found him playing on one team and coaching one or two of the girls' teams simultaneously. He became a girls' track coach at Valley Christian High School for 14 years where his youngest daughter attended high school.
Daryl's relationship with his Savior translated into a life of service. Using his gifts of serving and giving, he was always ready to lend a hand to anyone in need. He sang in the church choir, served on a Christian school board and a church council, participated in men's Bible studies, and being a natural handyman, particularly enjoyed serving in the men's ministry as leader of an outreach of helps to single and widowed women. Missions became a priority following participation in Worldwide Perspectives.
Daryl was an avid reader, a global traveler, an accomplished hunter of big and small game (with a special interest in bow hunting) and enjoyed fly fishing, golfing, running and biking. He could often be found strumming his guitar, singing the songs of Johnny Cash. His spirit of adventure made camping, boating, water skiing, hiking and travel adventures that were enjoyed by the whole family. He delighted in times spent with his wife, three daughters and their families, and always prioritized bidding for his trips around family events.
At age 62, Daryl faced a diagnosis of lymphoma with great courage and continued to remain active with the people he loved, doing the things he loved, until a neuro-degenerative disease robbed him of those abilities.