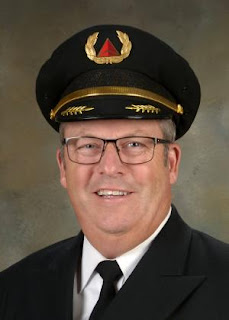 Notification with the passing of Brian Fitzgerald Regn, age 56.  Captain Regn joined Delta Air Lines 02-26-1998....please see career information below  ( https://en.wikipedia.org/wiki/Federal_Flight_Deck_Officer ).  He is survived by his wife Suzanne.
To view/sign the online guestbook please visit the funeral home website at
http://www.jfreichelfuneralhome.com/obituaries.html
Obituary information indicates services are planned for Tuesday, January 2nd  in Nazareth, Pennsylvania.  Calling hours will be one hour prior to service time and the evening prior.
For those wishing to send a personal note, Whitepages indicates the family residence as
129 N Main St., Nazareth PA 18064-1417.
Thank you,
~ Carol for the PCN
Obituary.....................  REGN, BRIAN
Brian Fitzgerald Regn, 56, of Nazareth, gracefully took his last flight home, Monday, Dec. 25, 2017. He was the loving husband of Suzanne Regn for 22 wonderful years.
Brian was born Sept. 22, 1961 in New Brunswick, NJ. He was the beloved son of Mary Ellen Regn of Nazareth and Henry Regn of New Albany, PA.
Brian graduated from Embry-Riddle Aeronautical University, of Prescott, AZ, with a degree in aeronautical science. He attained his lifelong dream of becoming a pilot; but unfortunately, due to his illness, he was forced to end his career as a Captain for Delta Airlines, which he was so proud to work for. Following the Sept. 11 attacks, Brian became an armed Federal Flight Deck Officer to defend the cockpit from any potential threats.
Brian became involved in Nazareth Borough government in 2012 and was appointed to Nazareth Council in 2014. Brian was the "voice of reason" on Council where he chose his words wisely, with the commitment of a devoted elected official. Most importantly, he brought integrity and dedication to his distinguished Council career while gaining the admiration of all who served with him.
Besides his wife and parents, Brian will be greatly missed by his son, Connor Regn, at home; brothers, Todd Regn of Nazareth, Matthew Regn and wife, Betsy, of Havertown, and by his sister, Elizabeth Taylor and husband, Robert, of Bloomsbury, NJ. He will be missed by his many nieces and nephews. Brian will be reunited with his predeceased brother, Andrew Regn.
As an avid hunter and outdoorsman, Brian will be sorely missed by his Longview Lodge Gang, where he spent many hunting seasons. Brian's love of adventure and motorcycles led him to meet some meaningful friends he considered his brothers. Together they traveled locally and the country to various motorcycle rallies, building comradeship and forever memories along the way. The many social clubs where he was a member of will greatly miss his infectious personality. As his many dear friends would attest, Brian had the rare ability to make anyone he encountered feel welcomed with his quick wit, incredible humor, and open kind soul. He will be remembered for his remarkable talent, he was a jack of all trades. He would do anything for anyone in need. Being a lifelong NY Giants fan, Brian jokingly requested that players from the team act as pallbearers to "let him down" one last time.
Services will be Tuesday, Jan. 2, 2018, at 10:30 a.m. in the Joseph F. Reichel Funeral Home Inc., of Nazareth. Followed by a Mass of Christian Burial at 11 a.m. in Holy Family Catholic Church, of Nazareth. Burial in Holy Family Cemetery, of Nazareth. Calling hours will be Monday, from 2 to 4 and 6 to 8 p.m. and Tuesday from 9:30 to 10:30 a.m.
In lieu of flowers, donations may be made in Brian's memory to Wreaths Across America, P.O. Box 249, Columbia Falls, ME 04623, or in c/o the funeral home. Online condolences may be offered at www.jfreichelfuneralhome.com