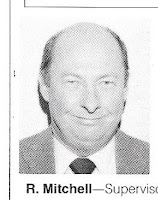 News with the passing of Delta Pioneer member retired Western/Delta agent Richard ‘Dick’ Heath Mitchell has reached us.  Dick was 81 years of age at time of passing.  Dick joined Western Air Lines in May 1964 and retired with Delta Air Lines in June 2001, based LAX as Line Ops Mgr., Dept. 062.  He is survived by his wife Carol.  Please see obituary information below.
Online condolences may be shared at
http://www.legacy.com/guestbook/DignityMemorial/guestbook.aspx?n=richard-mitchell&pid=187810506
Memorial services for Dick are planned for February 3rd in Los Angeles.
For those wishing to send a personal note, condolences may be sent to the family at
4865 Patrae St.,  Los Angeles CA 90066-6726.
Thank you,
~ Carol for the PCN
From: S.K. FRANKS Sent: Saturday, January 13, 2018 12:42 AM  Subject: Richard Heath Mitchell May 16, 1936 - January 9, 2018

Dick Mitchell passed away Tuesday, January 9th, 2018. Born in Boston, Massachusetts, he grew up in Watertown with his parents and older siblings;  sister, Lucille and brother, Paul. After graduation he enlisted in the Army and served in Boussac, France where he became a train engineer at the supply depot. Upon completing his service, he  chose to work for the airlines. He joined Pan Am and worked on the ramp, then decided to move to a location with warm winters. So, he and Bill Ward packed all their belongings in his car and drove to California. Finding a job was not easy; so he applied for the least desirable job...scheduling. Thus began his career with Western Air Lines and its amazing family. During that time he married; bought a home and settled in Hermosa Beach. He was single when Western was near bankruptcy; so he made plans to settle in Costa Rica. When Delta bought Western and created his Line Operations Manager position, he remained until his retirement in 2001. He met and married Carol in March of 1991 at the Inn of the Seventh Ray. Her daughters Katherine and Michele were instantly a major part of his life. With a honeymoon in Paris, they began their travels around the world. His organizational skills made every trip pure pleasure. Dick considered it an honor to be invited to the Silver Chiefs and Wallybirds reunions each year.  The calendar was planned around those events. Time spent with all the people from work filled his heart with joy. Alzheimer’s, diagnosed in 2007, progressed slowly until September of 2017 when he could no longer stand, walk or feed himself. The “Promises Kept” Board and Care home provided  loving care. Carol & Katherine were with him in his final moments.  A spectacular rainbow appeared as he left the home.

Dick is survived by his wife, Carol, and daughters Katherine Curto and Michele Edwards; his nephew Lance Beloungie (Nancy) Erica Noyes and Michele Marabella, nieces Luanne (Jack) Monahan, Erin and Johnny; and Laurel, Kelly and Kristen Everett and by many dear friends who will miss him greatly.

The memorial service will be held at Bel Air Presbyterian Church; 16221 Mulholland Drive; Los Angeles, CA 90049 at 10:30 am, Saturday, February 3, 2018 followed by a reception in the Discipleship Center.

Charitable contributions can be made to Alzheimer’s Greater Los Angeles (www.alzgla.org) or your favorite charity.